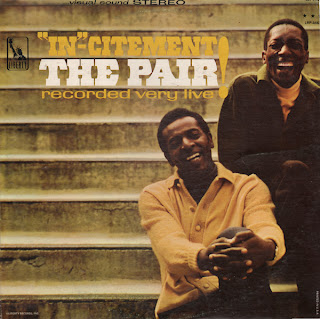 If you follow my blog you may have noted that I'm fond of Liberty releases. I've said that I have yet to stumble across a Liberty LP that I didn't enjoy and this is one Liberty pressing that I LOVE!

This seemingly obscure duo features Carl (Carlo) Craig (vocalist and left on the cover photo) and Marcus Hemphill playing the upright bass. The recording was made at The Mecca in Burena Park, California. The engineering is excellent. Like I said, I love this LP and I'm not that big into male vocalists. It is hard to believe that just a singer and bass player (an unusual combination) can be so captivating and cool.

Apparently this is the third release for the duo following The Pair Extraordinaire and The Pair Live at The Ice House (both on Liberty). Liberty did spend money promoting the group but I can't find much real bio information on them.

Bill Cosby wrote the jacket notes for this album and there is a note in Billboard, January 20, 1968 noting that "The Pair" were supporting Cosby on tour. And that they were booked at The New Frontier Hotel and in Las Vegas and then at Harrah's Club in Lake Tahoe.

I also found a note in Billboard, March 21, 1966 stating that the duo had just signed with The William Morris Agency.
Posted by By Mark Betcher at 5:13 PM