Gypsy Music From All Over The World 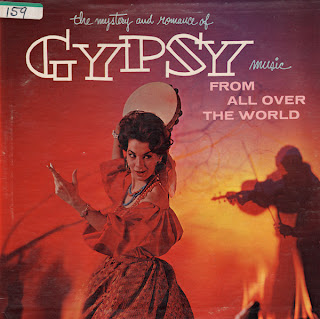 Nice cover for a Somerset album. The set is "off-the-shelf" stuff from Sania Poustylnicof, 101 Strings, Marischis Del Oro and Curro Amaya Flamencos. The release date as found on the Somerset Discography site is 1962. But there is a record featured on the back cover that mentions the year 1968.

Fairly stock stuff featuring a nice cover of A Russian Fantasy by an obscure artist. This same tune was featured on a record titled Gypsy Romance on Dyna-Disc.
Posted by By Mark Betcher at 3:40 AM