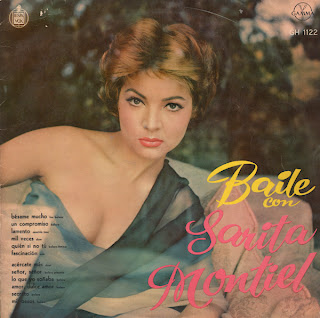 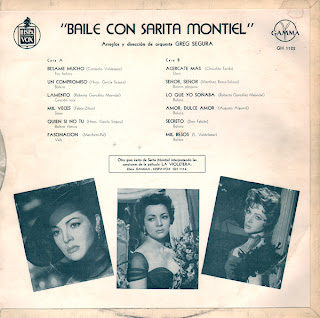 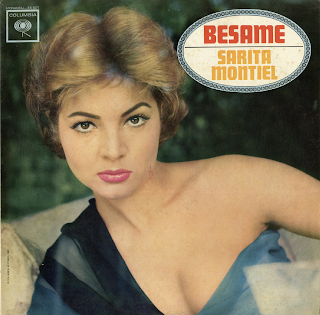 Besame Mucho
Baile Con Sarita Montiel
Arreglos y dirección de orquesta Greg Segura
Gamma - Hispavox
GH 1122
Besame
Sarita Montiel
Columbia EX 5077
1962
From the back cover (EX 5077): Sarita Montiel, reigning favorite of the Spanish-language cinema, was born in Campo de Criptana, a province of Cuidad Real, in Spain. When she was eleven, Sarita attended a Holly Week celebration in the small town of Orihuela. There she was discovered. At the head of a procession, singing a hymn to the Virgin, Sarita attracted the attention of motion picture producers, and one year later played a small part in the film Te Quiero Para Me (I Want You For Myself), directed by Ladislao Vajda. In spite of her small roles, Sarita was widely acclaimed by knowing film people, who saw in her the unmistakable gifts of an actress. In her first picture, she appeared under the name of Maria Alejandra; her true name is Maria Antonia Adad. In her next film, Empezo En Boda, she took the name Sarita Montiel. Sarita Montiel's popularity grew rapidly. All the Spanish directors sought to work with her. In her third picture she was again directed by Ladislao Vajda and worked with Antonio Casal. The movie, produced in 1945, was titled Cinco Lobitos (Five Little Wolves). In the same year, she appeared in Bambu, and was starred in Se Le Fue El Novio (The Lover Went Away) and El Viajero Del Clipper (The Clipper Passenger). Other triumps followed, and a few years later Sarita Montiel left Spain for Mexico. In the Aztecas studios she played in El Fuego (The Fire), Necesito Dinero (I Need Money), Martin Corona and Ahi Viene Martin Corona (Here Comes Martin Corona). The last film she made in Mexico was titled El Circle (The Circle). Hollywood producers won her over for their films, and she made Vera Cruz with Gary Cooper and Burt Lancaster, Run Of The Arrow, and Serenade, with Mario Lanza and Joan Fontaine. Sarita Montiel returned to Spain for El Ultimo Cuple (The Last Cuplet) which ranks among the most resounding triumphs or Spanish cinematography. After the success of El Ultimo Cuple, Sarita starred with Raf Vallone in La Violetera (The Violet Seller) which won her many international awards.