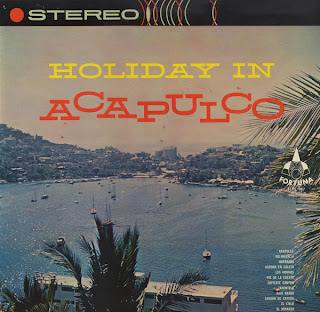 Budget release with no artist credit on the cover. On the label, the recording is credited to the Scott Mills Orchestra.

This obscure album, featuring a stock cover photo, is quite pleasant. A number of tracks are average Latin filler, but an equal number have a small combo flavor to them. The predominate instrument is the flute.

On the back cover is nothing about the music, but instead, a brief history of "The Evolution Of Stereophonic Sound".

A portion of this history includes a purchase, by The Shah of Persia, of the first three-track phonograph. A machine that was manufactured by the Columbia Phonograph Corporation in 1898. This player was advertised as "The Mulitplex Gramaphone Grand" and was the largest talking machine ever constructed.
Posted by By Mark Betcher at 8:00 PM