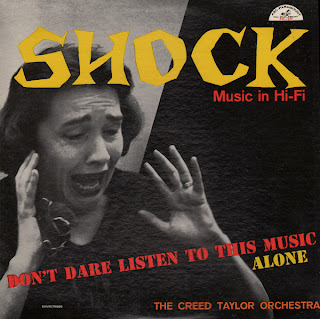 The album has probably been blogged 100 times, but here it is again.

It's a lovely trip to the land of "horror exotica". When looking at the image of the cover online, I couldn't have guessed that the photo is of Toni Darnay. The same photo is on the back cover. She is recording some part of this album (apparently a scream) in the studio when it was shot. How times have changed. from the few photos on the back cover, many of the folks in the studio were wearing suits and ties.

I was marveling over how daring the work is. But then I stopped to consider that all of these folks had grown up with radio programing that was loaded with sound effects. So if you combine that experience, musical trends of the day and a new sense of experimentation found in emerging "atomic age art & design" this record might have seemed like the thing to do at the moment... a room full of business suits or not.

Creed Taylor released a follow-up to this album titles "Panic. Son Of Shock". It's cool... but this is the must have.
Posted by By Mark Betcher at 1:29 PM