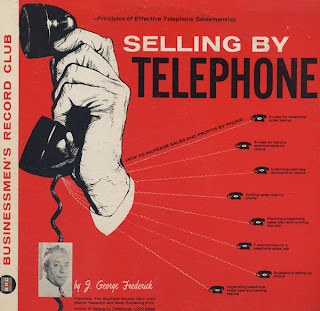 Selling By Telephone
How To Increase Sales And Profits By Phone
Businessmen's Record Club
By J. George Frederick

Is this guy that we all can blame for telemarketing?

Apparently Frederick wrote a book, also titled "Selling By Telephone". This book was reviewed in a 1928 issues of The Rotarian.

It is amazing that he was still actively pushing his concepts over 30 years later.
Posted by By Mark Betcher at 8:54 AM