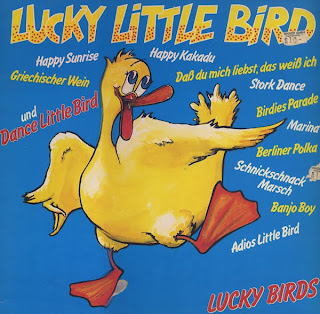 There is a Deutsche Mark price sticker on the cover. Some of the songs titles are in German and some in English. I don't know why.

I think I'm safe in stating that this album contains the most hellish recordings ever created in the history of everything. The music could be weaponized and used to drive terrorists insane (well... more insane).

It is so bad that I only had the nerve to listen one side at the lowest possible audio levels to keep myself from spontaneously combusting!

And look at that duck illustration... AWFUL

It's a wonder that America didn't break off the planet and float out into space when this LP was imported into the country!
Posted by By Mark Betcher at 7:34 PM