John Dote - A Hero From Zero 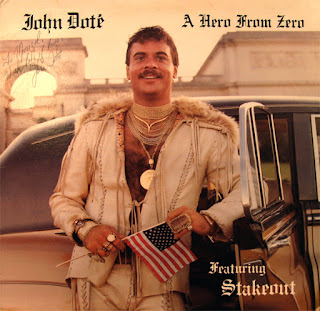 The Joke Is On You
John Dote
A Hero From Zero
American Artist Records - 198?

This is an amazing oddball record. First, John is still working. And during his career he has rubbed shoulders with a number of major stars including Michael Jackson. Apparently he helped Michael buy a Rolls for his Grandmother... who, in return for the favor, bitched about the color... so Michael and John drove the piece of crap gift back to the dealer to exchange it for a more appropriate color. Really... I'm not making this up.

And don't let the HORRENDOUS get up fool you. Dote was (is) a fan of Liberace and took wardrobe cues from him. In fact... it may be that one of the rings he is wearing on the album cover was given to him by Liberace.

Anyway... in addition to the great cover image and kick ass song... I found it interesting to note that NO WHERE on the LP is the song "Stakeout"... apparently the cover was printed and then the contents of the LP changed before the pressing (A recent comment suggests that Stakeout may have been John's band).

Also... Hero From Zero? Not the best title. In fact... why say that you were a ZERO at all? Why not title the LP: Love America? 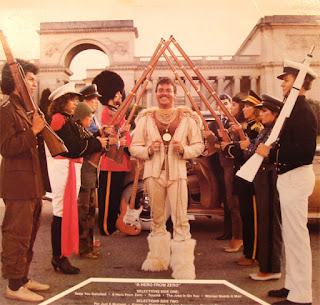 Because... I'm thinking the BACK cover was suppose to be the front cover at some point... There is a song on the LP titled Love America... there is no other logical reason for this image. It is hard to see... but there is a guy wearing a Reagan mask in the back, on the right...

I really love those boots!
Posted by By Mark Betcher at 10:04 AM