A Pell Of A Time - Dave Pell 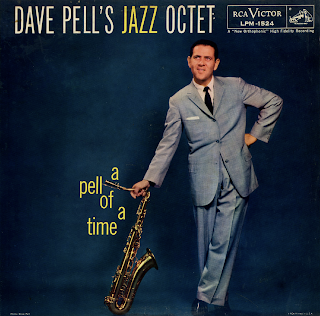 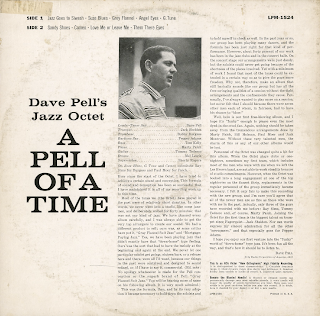 Most of the tunes we (the Octet) have played in the past were of relatively short duration. In other words, we never went into a studio, like some jazzmen, and deliberately wailed for forty minutes; that was not our kind of jazz. We have planned every album carefully, and I was always able to get the very top arrangers to create our sound. We had a different product to sell; ours was, as some critics have put it, "Gray Flannel Suit Jazz" and "Mortgage-Paying Jazz." Yes, we have been playing jazz that didn't exactly have that "down-home" type feeling. Ours was the sort that had to have the melody at the beginning and again at the end. We never let one particular soloist get going; sixteen bars, or a release here and there, were all I'd want, because of things in the past were contrived and designed to sound refined or, if I have to say it, commercial. (Ed. note: No apology whatsoever is made for the Pell conception or the superb brand of Pell "Gray Flannel Suit Jazz." You will be hearing more of the same on his following album. It is very much admired.)

This was the formula, then, and by its very adoption it became necessary to hold down the soloists and to hold myself in check as well. In the past year or so, our group has been playing many dances, and the formula has been just right for that kind of performance. However, about forty percent of our work has been in the jazz clubs and in the concert halls. On the concert stage our arrangements were just dandy, but the soloists could never get going because of the shortness of the pieces involved. Yet with a minimum of work I found the most of the tunes could be extended in a certain way so as to give the guys more freedom. Why not, therefore, make an album that still basically sounds like our group but has all the free swinging qualities of a session without the tight arrangements and the confinements they cause. Personally, I've always wanted to play more on a session, but never felt that I should because there were seven other men each of whom, in fairness, has to have his chance to "blow,"

Well, here is our first free-blowing album, and I hope it's"funky" enough to please even the most dyed-in-the-wool fan. Again, nothing should be taken away from the tremendous arrangements done by Marty Paich, Bill Holman, Paul Moe and Jack Montrose. Without these very talented men, the charm of this or any of our other albums would be lost.

Personnel of the Octet was changed quite a bit for this album. When the Octet plays clubs or one-nighters, sometimes my first team, which includes most of the men who were with me when we left the Les Brown band, are not able to work steadily because of studio commitments. However, when the Octet was booked into a long engagement at one of the top nighteries on the Sunset Strip, replacements became necessary. I felt it only fair to make this recording with the new group, and I'm sure you'll agree that all of the newer men are as fine as those who were with me in the past. actually, only three of the guys have recorded with me before: Ray Sims, Tommy Tedesco and, of course, Marty Paich. Joining the Octet for the first time is the biggest talent on trumpet since Fagerquist – Jack Sheldon. Nor can words express my sincere admiration for all the other "newcomers," and that especially goes for Pepper Adams.

I hope you enjoy our first venture into the "funky" world of "down-home" type jazz. It's been fun all the way, and that's how it should be to listen to. – Dave Pell