Music From The Happiest Girl In The World - De Vol 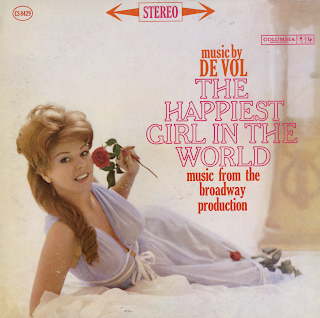 From the back cover: Frank De Vol is a conductor, arranger, composer and performer. He wrote the scores for the movie Pillow Talk, for which he was nominated for an Academy Award, and The Big Knife, and for his work as conductor and actor on the Rosemary Clooney TV Show he was nominated for an Emmy Award. Mr. De Vol is an able performer on every instrument except the oboe, the English horn, the bassoon and the harp. He began his musical career at the age of nine, helping his father in the music library of the Canton, Ohio, Grand Opera House. Young Frank soon learned to play the violin and piano, later mastered several other instruments and wrote his first score at sixteen. A lengthy period of arranging for various dance orchestras followed, until he moved to Hollywood to compose and conduct for movies, radio, television and recordings. He joined Columbia Records in 1957.

From Billboard - June 12, 1961: Composer-arranger Frank De Vol and his orchestra offer sparkling instrumental arrangements of the bright and lively Jacques Offenbach score from the hit Broadway show, "The Happiest Girl In The World." Some of the highlights are "Vive La Virtue," "Never Trust A Virgin," "Adrift On A Star" and "The Happiest Girl In The World." This pleasantly listenable package has solid sales potential. Excellent item for show music enthusiasts.

The Happiest Girl In The World
Eureka
Viva La Virtue and Never Trust A Virgin
How Soon, Oh Moon?
Shall We Say Farewell
Never Bedevil The Devil
Cheers For The Hero And The Oath
Adrift On A Star
The Glory That Is Greece/The Greek Marine Hymn
Five Minutes Of Spring
Whatever That May Be
Hup-Two-Three
Posted by By Mark Betcher at 5:44 AM