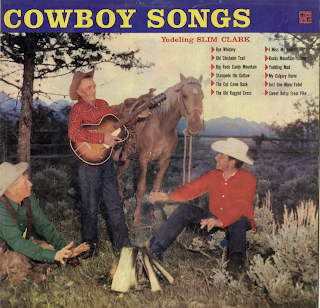 This collection can be had from online vendors so I will not be posting a sample.

A fine set of Slim Clark tunes from budget label, Masterseal. There is no cover notes confirming, but that appears to the Clark holding the guitar in the cover photo.

From the back cover: Considered by many to be the best of the authentic cowboy singers, Slim has won many awards for his delightful voice and currently holds the title "Champion Yodeler of New England." Known throughout New England for his radio and television work, Slim is rapidly becoming a favorite in the United States.