Jeff Chandler Sings For You 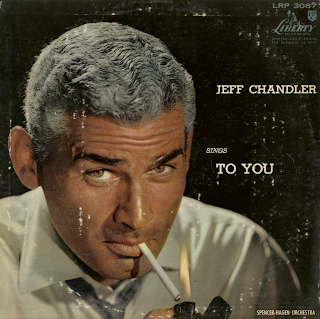 I Wished On The Moon
Jeff Chandler Sings To You
With The Spencer-Hagen Orchestra
Liberty Records, Inc.
LRP 3067
1957

Billboard's Album Cover Of The Week (September 16, 1957): A colorful closeup of Chandler with his steel grey crew cut exudes sex in a sort of cheesecake-in-reserve fashion. Should be a top draw for female patrons.

From the back cover: No Johnny-come-yesterday to the recording business, Jeff has long been known for his musical prowess. In his early days in radio when he played on "Our Miss Brooks" and other shows, the listeners came to know his wonderful speaking voice. And though it was not until 1954 that he made his first recordings, he had carefully prepared himself for his debut with a meticulous regard to detail that has characterized his approach to every phase of his career.

It is this quality that forced Jeff to forego the obvious rewards of recording and personal appearances when his picture and other business commitments bid for his time. He has starred in such top Hollywood productions as "War Arrow," "Foxfire," "The Tattered Dress." "Toy Tiger," and "Drango" (personally produced by Jeff and his own company). In his most recent leading role, Jeff shares the limelight with Kim Novak in "Jeanne Eagels." His performance in this picture has entrenched him permanently as one of the film industry's brightest stars.

A Lovely Way To Spend An Evening
Hold Me
With My Eyes
Wide Open I'm Dreaming
The More I See You
To You
You And I
I'll String Along With You
Welcome Stranger
I Wished On The Moon
Where Am I
Tell Me
Let's Get Lost
Posted by By Mark Betcher at 6:51 AM