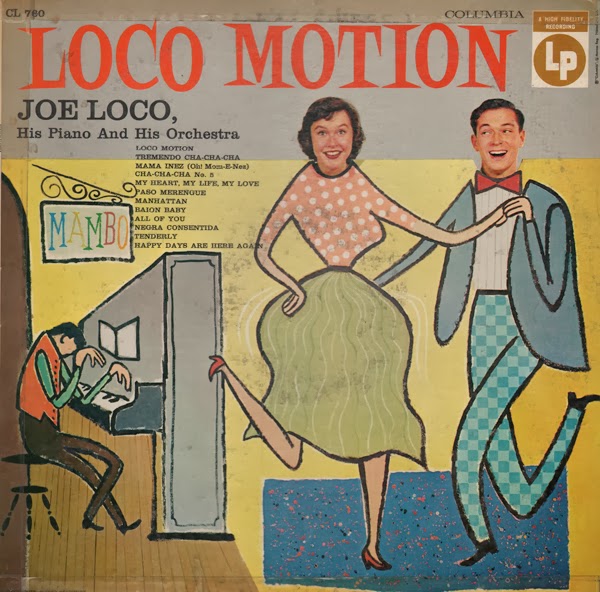 From the back cover: For his debut on Columbia Records, Joe Loco presents a lively program of the tingling music that has made him one of the most popular instrumentalists and band-leaders of the day. Beginning in 1946, Joe and his music have advanced the mambo, the merengue and the cha-cha-cha to dominant positions in popular dances, and have made recordings of domestic and Latin tunes that have sold in the millions. The reasons why are not hard to discover; they are all included in this program, with it's infectious rhythms and happy tempos, and most of all in the glittering piano playing of Joe Loco himself.

Joe Loco was born, Joe Esteves, in New York City, in 1921. At the behest of his parents, he began studying violin and dancing at the age of nine. Joe didn't think much of the violin, but progressed swiftly in his dancing lessons, and, by the time he was thirteen, was making professional appearances. After a lengthy tour in vaudeville, he returned to school and began to study piano and other instruments, and before long he was an accomplished performer on a wide variety of instruments, and had mastered arranging and composing. As a trombonist, he joined the New York Amateur Symphony, and soon thereafter joined Ciro Rimac and his Orchestra as a pianist. Among the other orchestras with which he has appeared are those of Xavier Cugat, Will Bradley, Machito and Enric Madriguera. During the war, he served with the Air Force, and returned to form his own group and do his shining bit to advance the popularity of Latin American Music.

Loco Motion
Tremendo Cha-Cha-Cha
Mama Inez
Cha-Cha-Cha No. 5
My Heart, My Life, My Love
Paso Merengue
Manhattan
Baion Baby
All Of You
Negra Consetida
Tenderly
Happy Days Are Here Again
Posted by By Mark Betcher at 8:55 AM