Swinging On A Harp - Betty Glamann 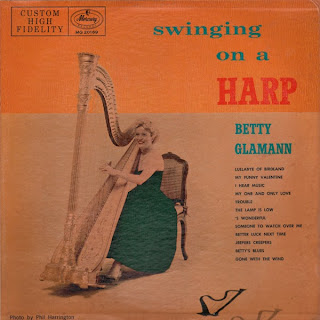 Also check out Glamann backing Marian McPartland on After Dark

From the back cover: When Betty Glamann was only 13 years old, she was first harpist for a symphony orchestra broadcasting twice weekly on NBC. Her accomplishment of the next few years were enough to fill out an illustrious career for most musicians. But for Miss Glamann they were merely prelude to the crowning glory, her emergence as the world's greatest harpist in the idiom of swing.

In this Long Playing set of swing classics, Mercury Records presents one of the most distinctive, engaging and amazing talents not only on the harp but in all of jazz music.

After taking her degree in music at Goucher College and the Peabody Conservatory in Baltimore, Maryland – where she learned to speak Portuguese along with the more conventional French and Spanish – Miss Glamann won a place as harpist with the Baltimore Symphony. She stayed for three years, then gracefully executed a violent switch. From the symphony, she joined Spike Jones and His Orchestra. As a foundation for his element of zaniness, Spike sets rigorous standards of musicianship which only the top layer of professionals have been able to meet. Then in another quick reverse, Miss Glamann swung from the delirious plane of Spike Jones to a call from the great lady of theater, Katherine Cornell, to play harp in the Broadway production of Antony and Cleopatra. She followed this with a contract as solo harpist for Jacobowsky and the Colonel starring Tallulah Bankhead.

Meanwhile, Miss Glamann's ear had begun to bend to jazz, and in her off-hours with other musicians, she applied the idiom to her instrument which previously had been restricted to more angelic sounds. Word began to get around the field about Betty's swinging harp. The late Fred Allen heard one of her remarkable sessions and opened a guest spot for her on a TV show. Garry Moore then did the same and then Steven Allen, always on the search for fresh jazz talent, spotlighted her.

In some of these off-hour sessions with musicians, Miss Glamann began to develop some ideas with Rufus Smith, the respected arranger and jazz bassist, about a quintet build around new sounds of the harp. The group was a sock success on Arthur Godfrey's TV shows. Then in 1955, after the incomparable Duke Ellington heard her, he added a place for the harp in his orchestra for the first time in his 30-year career and appointed Betty Glamann to the enviable place.

So here, then, is a smooth and ringing sampling of swinging on the harp by Betty Glamann, backed by Rufus Smith on bass (and he's the arranger too); Osie Johnson, drums; Barry Galbraith, guitar; and Eddie Costa, vibraphone and celeste.
Posted by By Mark Betcher at 5:02 PM