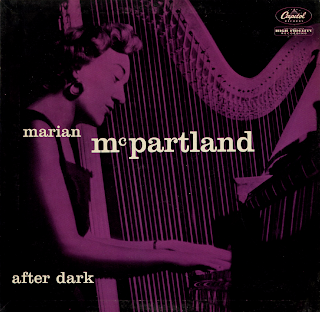 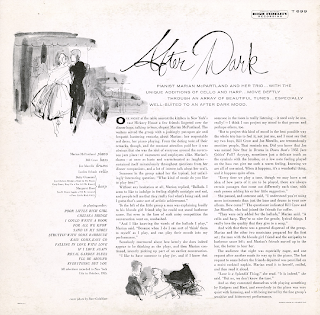 From the back cover: One night at the table nearest the kitchen in New York's vast Hickory House a few friends lingered over the dinner hour, talking to lean, elegant Marian McPartland. The waiters served the group with a joshingly put-on air and frequently bantering remarks about Marian: her respectable red dress, her piano playing. From the doting tone of their remarks, though, and the constant attention paid to her it was obvious that she was the idol of everyone alike. Marian's charm – at once as basic and warm-hearted as laughter – sustained itself miraculously throughout questions from her dinner companions, and a lot of intense talk about her craft.

Someone in the group asked her the typical, but unfailingly interesting question. "What kind of music do you like to play best?"

Without any hesitation at all, Marian replied, "Ballads. I seem to like to indulge in feeling slightly nostalgic and sad, and people tell me that they really feel what's being said, and I guess that' some sort of artistic achievement."

To the left of the little group a man was explaining loudly to his blonde girl friend why he could not stand barbecue sauce. But even in the face of such noisy competition the conversation went on, unabashed.

"And I like knowing the words of the ballads I play," Marian said. "Because when I do I can sort of 'think' them to myself as I play, and can play their moods into my performance.

Somebody murmured about how keenly she does indeed appear to be thinking as she plays, and then Marian continued, intently picking up part of an earlier conversations.

"I like to have someone to play for, and if I know that someone in the room is really listening – it need only be one, really! – I think I can project my mood to that person and perhaps others, too

"But to project this kind of mood in the best possible way the whole trio has to feel it, not just me, and I must say that my two boys, Bill Crow and Joe Morello, are tremendously sensitive people. That reminds me. Did you know that Joe was named New Star in Drums in Down Beat's 1955 Jazz Critics' Poll? Anyway, sometimes just a delicate touch on the cymbals with the brushes, or a low note feeling played on the bass can give me such a warm feeling, knowing we are all of one mind. When it happens, it's a wonderful thing, and it happens quite often.

"Every time we play a tune, though we may have a set idea of how parts of it are to be played, there are always certain passages that come out differently each time, with each person adding his or her little suggestion."

She paused, and someone said, "I understand you're using more instruments than just the bass and drums in your new album. How come?" The questioner indicated Bill Crow and Joe Morello, who had joined the friends for coffee.

"They were only added for the ballads," Marian said. "A cello and harp. They're so nice for gentle, lyrical things. I really love the quality that they give to a song."

And with that there was a general dispersal of the group. Marian and the other two musicians prepared for the first set; the man with the blonde girl friend and the antipathy to barbecue sauce left; and Marian's friends moved up to the bar, the better to hear her.

From Billboard - April 14, 1956: There's something very magic about the McPartland gal, and that great feeling gets over in big gobs on this classy and tasteful disking. In the ballads "Chelsea Bridge," "Sand In My Shoes," "Easy Come, Easy Go," etc., she uses cello and harp to augment her regular group and the added sound contributes much warmth and luster. But no matter who the back-up people may be (and Bill Crow on bass and Joe Morello on drums are tops in this set) the British artist makes elegant sounds and she's at her best here. Should Be a sickout counter item.

Poor Little Rich Girl
Chelsea Bridge
I Could Write You A Book
For All We Know
Sand In My Shoes
Struttin' With Some Barbecue
Easy Come, Easy Go
Falling In Love With Love
If I Love Again
Royal Garden
I'll Be Around
Everything But You
Posted by By Mark Betcher at 6:05 AM