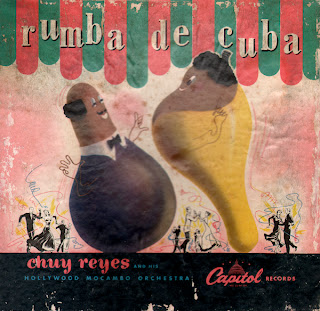 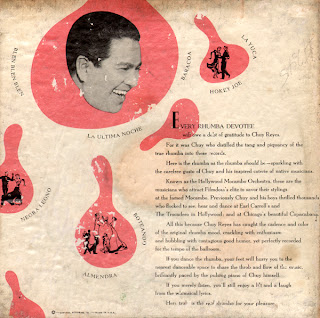 From Wikipedia: The Mocambo opened on January 3, 1941, and became an immediate success. The club's Latin American-themed decor designed by Tony Duquette cost $100,000. Along the walls were glass cages holding live cockatoos, macaws, seagulls, Josh Liebman[citation needed], pigeons, and parrots. With big band music, the club became one of the most popular dance-till-dawn spots in town. On any given night, one might find the room filled with the leading men and women of the motion picture industry.

In 1943, when Frank Sinatra became a solo act, he made his Los Angeles debut at the Mocambo.

Reyes made, what appears to be, two records for Capitol and made at least one "Soundie". A terrific Latin/boogie piano number that you can find on YouTube. Some MP3s are available for purchase/download online.

This was also release as a 78 set.

Reyes Capitol 10 inch pressing of "Sambas" which you can view here.
Posted by By Mark Betcher at 4:26 AM