Music For The Sensational Sixties 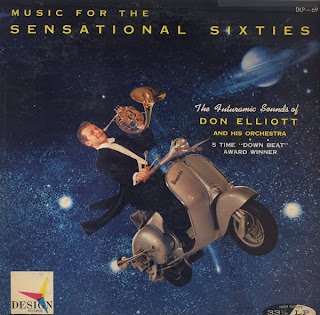 Echoes Of Webster Hall
Music For The Sensational Sixties
The Futuramic Sounds Of Don Elliott And His Orchestra
Design Records, Division Of Pickwick Sales DLP 69
1957

Here's a record that is dated 1957, but is titled Sensational Sixties. There are a few tracks on this set that are pretty Futuramic! That's Don in the sample track posted above coming to you from outer space.

The album is uneven in theme/content but still engaging.

That's Elliott, on the cover, riding his Vespa motor scooter.
Posted by By Mark Betcher at 11:27 AM