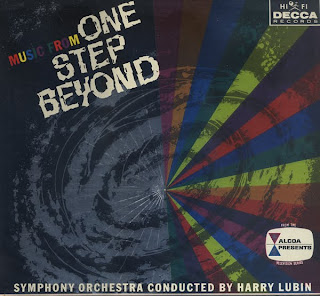 Music From One Step Beyond
Harry Lubin
Decca DL 78970

Musically, "Fear" the title track and theme song is "one step beyond" featuring Theremin and space age vocals. "Weird", the lead track on the B side is also a nice piece of "exotica" music with space age vocals.

Apparently, there is better "creepy" music to be found in the series. But other than the afore mentioned tracks the rest of the LP slides into somewhat more standard arrangements. There are a few more lush and wonderful tracks, mainly on the B side, but... not "One Step Beyond". None-the-less, the entire album is interesting and Fear and Weird make the LP great fun.

The graphic or illustration is printed on foil with a little embossing. An expensive jacket to produce and a nice addition to your space age record collection.
Posted by By Mark Betcher at 1:43 PM