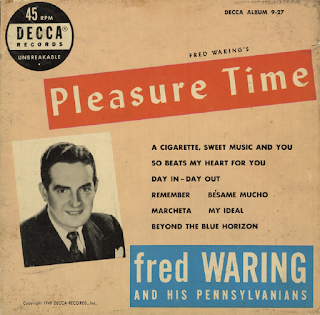 From inside the box: About Fred Waring

Fred Waring first gained famed with his Glee Club in theaters, recordings, and motion pictures. He carried his continuous experimentation with choral methods into the new field of radio, and development additional techniques to meet this special requirements of broadcasting.

Fred believes that making words understandable is as important as singing notes correctly. In the method of enunciation which he has developed, the group sings every component sound in every word in a careful defined unison. He calls each of them individual sounds a "Tone Syllable".

Fred Waring was born in Tyrone, Pa., June 9, 1900. As a Boy Scout he led the local Drum and Bugle Corps, and from it founded what is today the Pennsylvanians. The first "band" played local parties and was made up of Brother Tom Waring (piano), Freddie Buck (banjo), Poley McClintock (drums), and Fred Waring himself on banjo. All rehearsals then, and for many later years, were held in Mother Jessi Waring's parlor. And then, as now, they sang.

When Fred went off to study architectural engineering at Pennsylvania State College, of which his great-grandfather William G. Waring was one of the founders and its first president, the band continued to function. Fred booked week-end jobs at the fraternity house dances, and added a couple of new men to the group.

Waring, always on the look-out for promising talent, by his second year in college had assembled a group of men so able that even today some are still members of the organization. While Brother Tom and Poley hold the record for longest service, more than 25 years, there are 14 other who have been with Waring more than 10 years. Fred Culley, violinist and assistant conductor, joined the Pennsylvanians in 1924, following his brother George, trumpeter, who had been with the group for several months. Nelson Keller, another trumpeter, joined the band in 1922, and Fred Campbell left the Sousa band to join Waring in 1923, after an attack of arthritis was made chief librarian – a library, incidentally, that is insured for a half-million dollars.

The Waring organization today is not simply a band. Its musical activities spread in many directions. They have organized and trained choral groups for radio, Broadway musicals, symphony concerts, industry, community and even educational projects. The Pennsylvanians have always collected top honors in radio polls. When on the air at night, Fred Waring's show was, for five consecutive years, named the "Best Quarter Hour Program" by newspaper radio editors in the United States and Canada. Changed to a daytime hour, Waring continued to lead the field and has twice been awarded the honor of "Best Daytime Show."

A Cigarette, Sweet Music And You
So Beats My Heart For You
Day In - Day Out
Remember
Besame Mucho (Kiss Me Much)
Marcheta
My Ideal
Beyond The Blue Horizon
Posted by By Mark Betcher at 4:29 PM