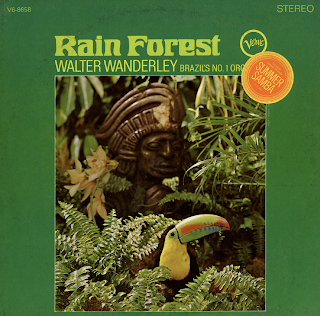 From the back cover: The young Sao Paulo organist first caught the public ear with his brilliant arrangements for his good friend and compatriot, Joao Gilberto. The year was 1961. By '62, Wanderley was a headliner in his own right, launching a string of hits that included The Girl From Ipanema, Desadinado and the high-flying Song Of The Jet (which you'll hear in this album).

Sumer Samba
It's Easy To Say Good-Bye
Cried, Cried
Rain
The Girl From Ipanema
Beloved Melancholy
Taste Of Sadness
Beach Samba
Cry Out Your Sadness
The Great Love
Song Of The Jet

Posted by By Mark Betcher at 5:57 PM No comments: 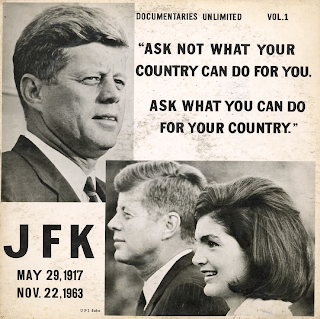 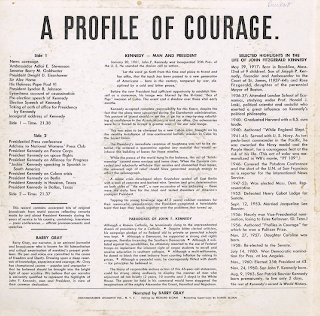 President Kennedy on Cuban Crisis
A Profile Of Courage
JKF May 29, 1917 - November 22, 1963
Narrated by Barry Gray
Editing by Richard Sloan
Recording Supervision by Daniel Sloan
Documentaries Unlimited Inc.
From the back cover: Paradoxes of John F. Kennedy
Although a Roman Catholic, he tenaciously clung to the unprecedented dream of presidency for a Catholic.
Despite bitter clerical criticism, his campaign pledge of no Federal aid to private or parochial schools was kept.
Although a Democrat, he supported a strong civil rights program, thereby incensing the Southern Democrats.
Although it militated against his sensibilities, he ultimately resorted to the use of Federal troops to implement the inherent right of negro students to enroll and receive education in southern colleges.
Although a multi-millionaire, he dared to block the steel industry from courting inflation by raising its prices
Although a peaceful man, he courageously flirted with death – for principles he believed in.
Also from the back cover: Barry Gray, our narrator, is an eminent journalist and broadcaster who is known for his humanitarian and critical examination of mankind's present problems. His pen and voice are committed to the cause of freedom and liberty. Drawing upon a deep reservoir of knowledge, experience and courage, Mr. Gray has championed causes – popular and unpopular – that he believed should be brought into the bright light of open scrutiny. We believe that our narrator is eminently qualified to represent the highlights of John F. Kennedy, man and President, in vie of their common dedication.
Side One
News Coverage
Ambassador Adlai E. Stevenson
Senator Barry M. Goldwater
President Dwight D. Eisenhower
Sir Alec Home
His Holiness Pope Paul VI
President Lyndon B. Johnson
Eyewitness Account Of Assassination
Pre-Election Speech Of Kennedy
Election Speech Of Kennedy
Talking Of Oath Of Office For Presidency By Kennedy
Inaugural Address Of Kennedy
Side 2
Presidential Press Conference
Address To National Women's Press Club
President Kennedy on Peace Corps
President Kennedy on Space Flights
President Kennedy on Alliance for Progress
"Jackie" Kennedy Speaking in Spanish in South America
President Kennedy on Cuban Crisis
President Kennedy on Berlin
President Kennedy in Houston, Texas
President Kennedy in Dallas, Texas
Posted by By Mark Betcher at 5:09 PM No comments: 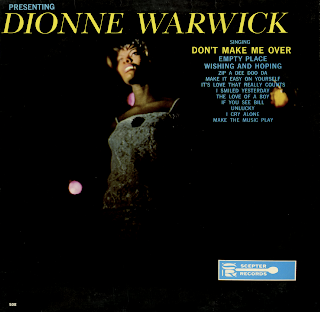 From the back cover: First record, first hit. It's not as easy as it sounds. Dionne studied music for years. In time she became an accomplished singer and pianist. Playing and singing in church every Sunday, her talent for music flourished and grew. Her next step forward took Dionne to the recording studios in New York. There she sang in the background chorus on many recording sessions. This was when she was first seen and heard by two songwriters, Burt Bacharach and Hal David. They brought her to the attention of the Scepter Record Co. and what followed is "Don't Make Me Over."

From Billboard - April 20, 1963: Dionne Warwick has a sound and a style and she has a chance to get attention with this, her first album for the label. She sells in a warm and tender way both originals and standards that should interest and "Don't Make Me Over," "Empty Place" and Wishin' and Hopin'."

The Empty Place
Wishin' & Hopin'
I Cry Alone
Zip-A-Dee-Doo-Dah
Make The Music Play
If You See Bill
Don't Make Me Over
It's Love That Really Counts
Unlucky
I Smiled Yesterday
Make It Easy On Yourself
The Love Of A Boy
Posted by By Mark Betcher at 4:18 PM No comments:

This Is Nat "King" Cole 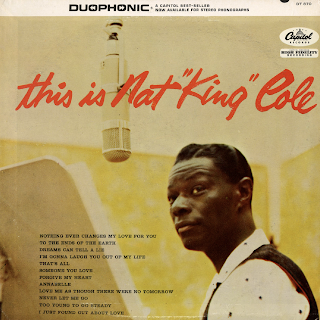 Posted by By Mark Betcher at 3:35 PM No comments:

Have Blues Must Travel - Roy Hamilton 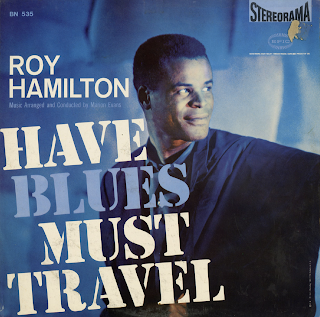 From Billboard - November 23, 1959: Roy Hamilton, who scored with You'll Never Walk Alone and Unchained Melody, has a new wax working for him, Ebb Tide. The Epic recording artist has an exciting collection of favorites in his new album: Have Blues Must Travel, Mood Indigo, I Got It Bad And That Ain't Good, Stormy Weather, Sophisticated Lady, I Get The Blues When It Rains, etc. Folks in the New York area can catch Roy art the Town Hall, Brooklyn, till Nov. 26.

Moon Indigo
I Could Have Told You
I Get The Blues When It Rains
Sophisticated Lady
My Story
A Cottage For Sale
Solitude
Please Send Me Someone To Love
I Let A Song Go Out Of My Heart
I Got It Bad And That Ain't Good
Stormy Weather
I Surrender, Dear

Posted by By Mark Betcher at 10:40 PM No comments: 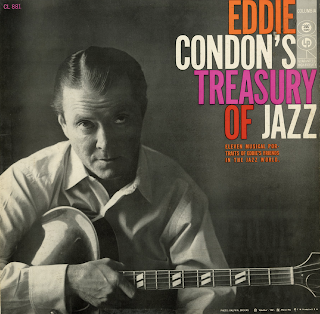 I've Got A Crush On You
Eddie Condon's Treasury Of Jazz
Eleven Musical Portraits Of Eddie's Friends In The Jazz World
Eddie Condon and His All-Stars
Photo: Ralph A. Brooks
Columbia Records CL 881
1956

I'm Gonna Sit Right Down And Write Myself A Letter
I've Got A Crush On You
Duff Campbell's Revenge
Don't Get Around Much Anymore
Someday You'll Be Sorry
I'm Confessin'
Three-Two-One Blues
Since My Best Gal Turned Me Down
Just Friends
Sometimes I'm Happy
I've Found A New Baby
Posted by By Mark Betcher at 9:42 PM No comments: 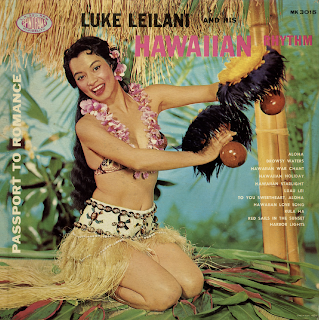 Posted by By Mark Betcher at 8:33 PM No comments: 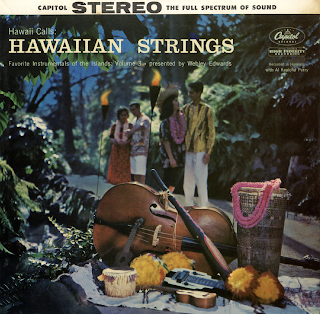 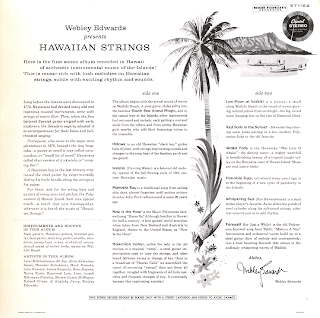 Instruments and sounds in this album:

Artists in this album: 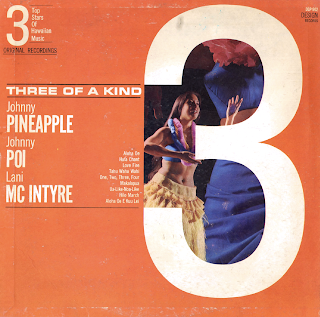 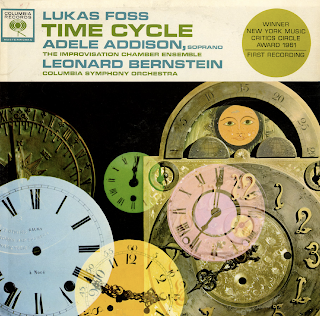 When The Bells Justle

Lukas Foss
Time Cycle
Adele Addison, Soprano
The Improvisation Chamber Ensemble
Leonard Bernstein
Columbia Symphony Orchestra
Cover Photo: Columbia Records Photo Studio - Henry Parker
Columbia Records Masterworks ML 5680
1961
The Improvisation Chamber Ensemble
Lukas Foss - piano
Richard Dufallo - Clarinet
Charles DeLancey - Percussion
Howard Colf - Cello
From the back cover: On Thursday evening October 20th, 1960, Leonard Bernstein addressed the Carnegie Hall Philharmonic audience: "My colleagues on the stage and I think so highly of Lukas Foss' Time Cycle that we would like to make a proposal: If you wish, we will repeat the whole piece for you... And if there are only twelve people in this house who want to hear it again we will play it for those twelve." Thus, Time Cycle became the first composition repeated by the New York Philharmonic at the occasion of its premiere.

Lucas Foss' Time Cycle was commissioned for Adele Addison by the Ford Foundation's Humanities and Arts Program. The work marks somewhat of a departure from the composer's earlier music, mainly because of the absence of the neo-classic or neo-baroque. The vocal writing is "Lied" rather than "Aria." (Foss' Song Of Songs", for instance, could be termed a series of arias.) Furthermore, tonality is clearly defined only in someplace, totally destroyed in others. Finally, from and content, organization and substance can no longer be distinguished one from the other. They have become synonymous. Each song develops its own serial devices (of which the twelve-tone row is the least frequently used).

The four songs are not tied to each other by either motive or row. Only a chord, a single sound – C#ABD#, which undergoes various alterations – serves as a unifying elements. Though there is no overall musical motive, there is a literary one: the "time-motive". Each poem refers to time, clocks, or bells. The relationship between music and words in the individual song goes beyond mood painting. The idea and structure of the poem is mirrored in the idea and structure of the music. Text and music are fellow conspirators. The first two poems are English, the last German. Each song is sung in the original language.

Adele Addison was brought up in Springfield, Massachusetts and trained at the Westminster Choir College in Princeton and the Berkshire Music School at Tanglewood, Lenox, Mass. She has appeared as guest soloist with the New York Philharmonic, the Boston Symphony and other major orchestras. Last season the wide range of her musical activities included recording for the motion picture sound track of Gershwin's "Porgy and Bess" and singing the role of Melisande with the Washington, D.C. Opera Company.

Miss Addison is one of the artists selected under The Ford Foundation Program for Performing Musical Artists.

Lukas Foss, American Composer, conductor, pianist and Professor of Music at UCLA was born in Berlin in 1922. A graduate of the Curtis Institute of Music, Philadelphia, in 1942. Foss is perhaps best known for his operatic and vocal compositions which won him many of the country's major awards: The Prairie (Sandburg), Song Of Anguish (Isaiah), Song of Songs (to be released on Columbia Records). Parable of Death (Columbia ML 4859). Psalms and three operas. Other works include Odeand Symphony of Chorales for Orchestra, two Piano Concertos and a String Quartet (Columbia ML 5476). With his latest composition, Time Cycle, and his recent adventure into ensemble improvisation, the 38-year-old composer, known previously as a traditionalist, adds bold new dimensions to the wide range of his expressive talents.