For Those Who Think Young - Joanie Sommers 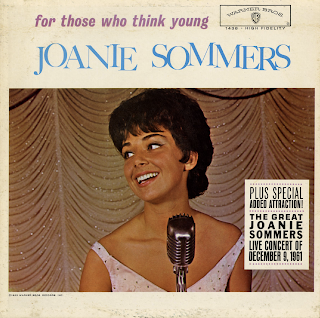 Out Of This World
For Those Who Think Young
Joanie Sommers
With Marty Paich and His Orchestra
In Very Live Concert
Cover Photo: Gene Trindl
Warner Bros. Records
HIGH FIDELITY W1436
1962

The Band Side with the Orchestra of Marty Paich

Joanie Sommers, recently tabbed for Steve Allen as "just about the greatest young singer around today," pays a repeat call on a swinging big band, that of Marty Paich. It's a repeat call, since some two years ago, Marty backed Joanie on the LP that started it all swinging, Joanie's debut album. "Postively the Most!"

With two years of steady singing, behind her – on TV (with Ernie Ford, Steve Allen, Bobby Darin, and many others), on a long string of cross-country concerts with Mort Sahl, on radio where her albums and singles join with her swinging vocalizing for Pepsi Cola (hence the title of this album) – Joanie is ready to "move" as never before. One of the few vocalists around who isn't intimidated by a big swing band behind her. Joanie relishes and is even spurred to new inventions by a blast of brass backing her up.

For this set of six, leader-arranger Marty Paich has massed some of the most talented jazz musicians in Hollywood to create the movement behind Joanie. Names such as Bud Shank, Conte Candoli, Abe Most, Frank Rosolino, Jack Montrose, Alvin Stroller, Bill Perkins, Lou Levy, Bill Hood and Stu Williamson signed up for the recording session, and each of them (plus many others) blew as if realizing that in backstopping for Joanie they were working with the best.

No need to cover the tunes one by one here. They're the kind Joanie belts the best, from the rocking "Hard Hearted Hannah" (The Vamp of Savannah) to Theolonius Monk's "'Round Midnight," there's a wide variety of stylings here, and the kind of tunes Joanie's fans expect of her: Show Stoppers.

Following her coast-to-coast concert trek with Mort Sahl, Joanie Sommers returned home to Souther California, for one of the highlights of her entire career, the much talked-about December Night concert at California's Valley State College. Working with the basis of her regular touring group, led by pianist Bob Florence, Joanie had the benefit of a year's break-in with the musicians. This meant a close-knit musical empathy within the group. Each member understood the others, and their jamming showed it, especially with the added boost of such men as Bill Perkins and Stu Williamson to bring the group up to sextet strength.

Picking up on a kind of home-town enthusiasm, Joanie sang as well at this one live session as she ever has before. The crowd helped immensely, for it knew three things: (1), that this concert was being recorded, and the audience wanted it to be good; (2) that Joanie was their girl, a product of their schools, and their own success story; and (3), that Joanie, from the outset, was elated about the whole idea of this appearance, her first live concert recording.

What was created that day was a very swinging concert, of which the six tunes collated here from the high points. Equally at home with the tender and mellow (as in, for example, "My Ship"), Joanie concentrated on her proved big numbers, the ones that time and again wowed her audiences from Bangore on west. "You Came A Long Way From St. Louis" is a good example, a rocking sock of song the builds all the way. With that kind of repertoire and that kind of singing it's little surprise that this concert was the success that it turned out to be.

From Billboard - January 20, 1962: The Pepsi Cola slogan, which Joanie Sommers sings in radio-TV Jingle from for the soft drink firm, makes an effective title for the canary's new album. She is in vivacious, tasteful vocal form on a group of show manly oldies. Marty Paich provides solid backing on one side of the LP, while the flip spotlites the thrush in exciting "live concert" takes.

A Lot Of Living To Do
Out Of This World
'Round Midnight
Hey! Jealous Lover
Hard Hearted Hannah
Blues In The Night
I Feel A Song Comin' On
You Came A Long Way From St. Louis
My Ship
Ev'rything I've Got
Why Shouldn't I
I Feel Pretty
Posted by By Mark Betcher at 7:50 PM