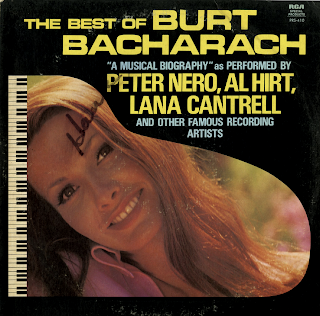 How Can I Hurt You
Gaines Presents The Best Of Burt Bacharach
"A Musical Biography" as Performed by Peter Nero, Al Hirt, Lana Cantrell
And Other Famous Recording Artists
Prepared Exclusively for General Foods Corporation by RCA
RCA Special Products PRS-410
1972

Hugo Montenegro (Raindrops Keep Fallin' On My Head). Both Hal David and Burt Bacharach enjoyed some success as songwriters before they got together, but when they did something magical happened. Their collaboration has produced more contemporary standards than any other team. "Raindrops," introduced by Butch Cassidy and the Sundance Kid, is the favorite of many. In a world deluged with problems, it's nice to hear an optimistic note now and then.

Si Zentner (Wishin' And Hopin'). Though there are thousands of songwriters grinding out their wares every day, there are very few indeed that gain the reputation for quality and consistency associated with Bacharach and David. Music, being the international language, has made their songs desired around the world. This song recorded by England's Dusty Springfield became an international hit right away, as do so many B and D songs.

Marilyn Maye (I'll Never Fall In Love Again), like many popular singers today, emerges from the special medium of TV signing commercials. Her voice quality, style and personality, above all else, communicate the composer's intent via the somewhat less "hot" medium of recordings. Her club performances of this number from "Promises, Promises" have helped to establish her as one of the top live acts in the country. Or should we say, "lively"?

Peter Nero (I Say A Little Prayer). The beauty of Bacharach-David songs is that they can be presented so many different ways and still have the same great impact. Even with the words missing (and great words they are), the melody stands well enough on its own to make this recording by Peter Nero a delightful listening experience.

Norman Luboff (Walk On By). Perhaps the best example of first-generation Bacharach-David songs, "Walk On By" has the structure and rhythmic patterns that have become their trademark. The result is a captivating combination of intense emotion and poignancy. This recording is a special treat, with full, mixed chorus and orchestra spectacular capturing the mood for which it was written.

Floyd Cramer (They Long To Be Close To You). In the music business they say, "You can't keep a good song down." Here's an example of a Bacharach-David tune that became a hit years after it was written, and served as the vehicle to launch the spectacular career of the soft-rock Carpenters. Of course, since then almost everybody has recorded it. Here, country pianist Floyd Cramer lends his very special style to Burt's lovely melody.

Lana Cantrell (How Can I Hurt You). As an afterthought to the success story of "Close To You," here's an example of a Bacharach-David song that has not yet become as popular as the other songs in this album. However, artists like Lana Cantrell have already discovered it. Listen and make your own decision. Perhaps, soon, when it is as popular, you will remember where you first heard it... and see how good a judge you are.

Al Hirt (Do You Know The Way To San Jose). We've heard male and female vocals, country and city pianos, orchestras and choruses... all taking Bacharach-David songs and making them sound great, in their own way. Now listen to the big bearded one from New Orleans as he "puts away" this very distinctive Bacharach composition. Universal appeal is probably the one phrase that describes Bacharach-David songs best.

Peter Nero (Always Something There To Remind Me). From the same generation of Bacharach-David songs as "San Jose" comes this tune (both songs originally recorded by Dionne Warwick). Dionne is one of many artists who found their career-launching vehicles in a Bacharach-David work. To steal from the title, there's always something there to remind us it's definitely a Bacharach-David song, and why artists like Peter Nero find it a pleasure to record them.

Living Strings and Living Voices (What The World Needs Now). No other song better expresses the feeling of the younger generation in their quest for new and better human values. Here, we must provide you with both the words and the music, because the message in both is so beautiful:
"What the world needs now,
Is love sweet love
No not just for some
But for everyone
Posted by By Mark Betcher at 3:49 PM