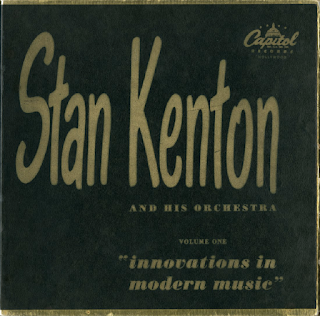 From the inside box cover: In the summer of 1941, some fifty miles down the Southern California coast from Los Angeles, an unknown and somewhat musically fanatic Stan Kenton began unleashing from his fertile brain a music that was destined to make a unique contribution to the already flourishing music business. These ideas were amassed into the tangible form of "Artistry In Rhythm."

Growth was inevitable – stumbling at first like a child who has just discovered his legs, but always headed forward. Development and progress are synonymous; so after five years of indoctrination, the successful ideas were segregated and became known as "Progressive Jazz."

This was the second segment of Kenton's musical history. It found the band successfully departing from the smoke-filled, popcorn-littered, acoustically criminal ballrooms to the musical freedom of the concert stage. In this idiom the orchestra enjoyed its greatest success. There was one realization, however; one that was responsible for the startling announcement in December 1948 when Stan informed the band and the world that he was "throwing in the towel" at the time when he was perched high on a pedestal in the world of modern music. This was the limited number of performances that the band could present without returning, the balance of the year, to the slavery of he traditional demands made by "popular music." These would have been concessions that an undying integrity wouldn't allow him to make. Hence, seeing no immediate solution, "Progressive Jazz," so far as Kenton's active participation was concerned, came to an end.

Although the future was very vague for the time, the Kenton brain was far from sterility and was functioning constantly, formulating new ideas and mentally following the ramifications of each. New fields were even considered. Not too serious, however, inasmuch as Stan's thoughts would inevitably return to the realization that his first duty and obligations was to music – the field for which he was best suited.

After nine months of relaxation and rested thinking, plans for the future became positive. Those plans immediately became history, for in October of 1949 the news went out to millions of anxious ears that Kenton would return, but would utilize the only feasible medium in which his music could be advantageously presented - that of the concert stage.

It's obvious, then, that the stumbling brainchild which was born during the summer of 1941 has grown into manhood – and with manhood comes the musical maturity that is behind Kenton's third venture into a business which, more than any time in history, feels the need for creative music, examples of which are herewith evident in this, the first edition of "Innovations In Modern Music."