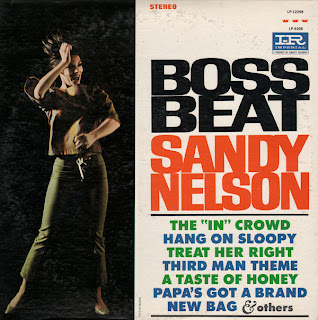 Gosh dang it! This one is available by MP3 purchase/download so I will not be posting a sample

This is a great mid-60s light-pop album that is set apart from period counterparts by the driving boss beat of drummer Sandy Nelson. There is one unique song on side two titled Drums In A Sea Cave. This song has an exotica vibe and also reminds me of a big band drum solo. The tune is totally different than any other song on the album and is one of my favorites. The album winds up with a wild cover of The 3rd Man Theme.

This LP was recorded several years after Nelson was in a motorcycle accident, receiving injuries that required amputation of his right foot and part of that leg. Obviously Nelson made a come back and recorded this fine album along with many more to follow. Read about Nelson on his wiki page.
Posted by By Mark Betcher at 3:40 PM