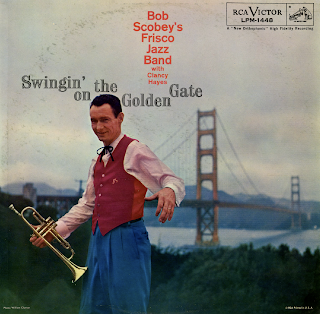 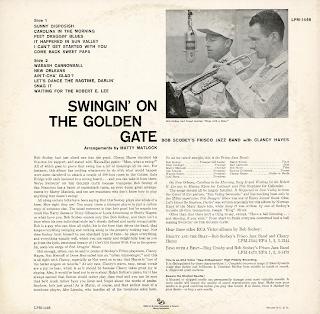 From the back cover: Not enough, either, can be said in praise of Scobey's Frisco playmate, Clancy Hayes. Nat Hentoff of Down Beat called him an "urban minnesinger," and this is all right with Clancy, especially as Nat went on to say that Hayes is "one of the better singers on records." At any rate, Clancy's warm, easy, casual vocals are a joy to hear, which is as it should be because Clancy takes great joy in singing. Also, it would be hard not to rave about Ralph Sutton's piano, for it has always seemed that Sutton would rather play than read and you can be sure that he'd much rather have you listen and forget about the words of praise. Anyhow, he's just great! As is Matty, of course, and that anchor man of a trombone player, Abe Lincoln, who handles all of the trombone solos here.

Sunny Disposish
Carolina In The Morning
Feet Dragin' Blues
It Happened In Sun Valley
I Can't Get Started With You
Come Back Sweet Papa
Wabash Cannonball
New Orleans
Ain't-Cha' Glad
Let's Dance The Ragtime, Darlin'
Snag It
Waiting For The Robert E. Lee
Posted by By Mark Betcher at 8:17 PM