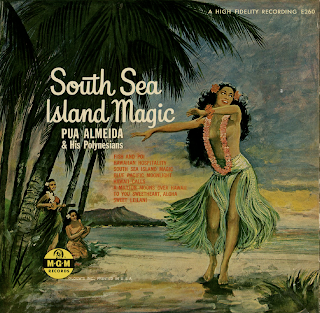 From the back cover: Charles Puaonaona Almeida better known as "Pua" was born in Honolulu on February 17, 1922. This young man of Hawaiian-Portuguese racial extraction started his training of both voice and music of birth under the guidance of his blind father John K. Almeida to whom recently, special tribute was paid as Honolulu's "King Of Composers".

Pua made his debut to the entertainment world at the age of 6 with a ukulele in his hand, singing and playing a solo for an island concert. He went as far as the 8th grade and then had to leave school to work with his father playing music for a living.

In 1947 he made his first trip away from the islands with 3 musicians and a dance to entertain for 6 months at the Pago Pago Club in Colton, Calif. In 1950 he entertained on Okinawa, Japan for 5 months and then he joined Alice Hall's quartet in Honolulu as bass-man, steel-guitar player and vocalist. Later he left the quartet and went back to island music, opening at the Huntington Hotel in Pasadena with Eddie Bush, George Kainapau and Alfred McIntyre. He is currently working under the leadership of Sam Koki at the 7 Seas Club on Hollywood Blvd., across from Grauman's Chinese Theatre in Hollywood and at the same time is doing television shows and recordings.

Pua's experience in music and entertainment is priceless for he is one of the few musicians and singers who has so much love and soul in his work that to listen to him is to hear the rolling of surf, and the carefree laughter of island people, and to smell the sweet fragrance of tropical flowers.

In this MGM Record album the voices of Solomon Kamahele Jr., Sam Kaaupuni and Sam Koki are also heard with Pua Almeida.