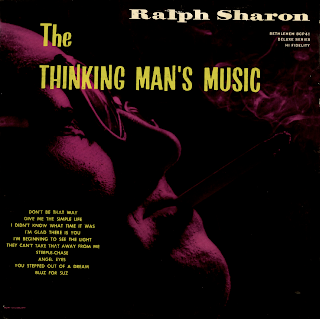 From the back cover: Ralph Sharon has been a dedicated student of the piano and of piano styles for more than sixteen years. Although he has been recording for a large part of that time, this LP – which is his first in the U. S. – is, by his own admission, his best recording to date. To amplify his analysis further, Ralph feels that the work of the trio in general and his own piano in particular is as uncluttered and as free of excessive tricks and influences as anything he has been able to attain so far, short of a live performance. Ralph Sharon is an English-born musician who inherited his talent for music from his mother and developed it formally at the Royal Academy of Music. He readily agrees that his orientation in jazz has a second-hand nature about it, in view of the fact that American jazz records were virtually the only source of exposure that he and his countrymen had to compelling American jazz styles.

Having established himself as a capable musician in England, Ralph came to this country some two years ago with a two-fold purpose in mind: to organize a musical group and to hear for himself the variety of piano stylists working in this country. The first he accomplished with relative ease, and although the personnel may change from time to time, the format in the same politely swinging style contained in these sides. The second is a never-ending ritual with Ralph in his quest to assimilate as much of "what's going on" as his time and commitments will allow. Because of this open-minded approach to his work Ralph expects that changes in his style will continue to occur for quite some time. Typical of Ralph's devotion to developing his talent further is his feeling that he must know the lyric to any tune in his repertoire. Seemingly unimportant, Ralph explains that this is an aid to greater sound" in his instrument. This coupled with other applied "extras" indicate Ralph's serious and yeoman-like efforts toward increasing his stature as an important jazz artist.

Choice of personnel for the trio is also the result of profound thought and listening by Sharon. Ralph seldom auditions a man under the circumstances usually described by the word. If he is in need of a replacement, he makes every effort to hear the man "on the job." This methodical approach provides him with young and stimulating musicians who compliment his piano style so well.

On these sides Jay Cave is heard on bass and Christy Febbo on drums. Cave is the 22 year old newcomer from Youngstown, Ohio whom Ralph regards as a fine young prospect because of his extraordinary solo work. Cave's ability in this direction stems from the fact that he plays very good piano as well. Until he joined the Sharon Trio, Cave has been working jobs in his own home town. Christy Febbo has been drumming professionally for 5 years. He's a native of Altoone, Pennsylvania. and his reputation as a jazz drummer is top-drawer within the trade. He's been on the Herbie Fields band, and provides the lightly swinging beat which Ralph demands for a successful unit.

Don't Be That Way
Give Me The Simple Life
I Didn't Know What Time It Was
I'm Glad There Is You
I'm Beginning To See The Light
They Can't Take That Away From Me
Steeple Chase
Angel Eyes
You Stepped Out Of A Dream
Bluz For Suz
Posted by By Mark Betcher at 9:05 PM