A Place In Time - Dave Brubeck 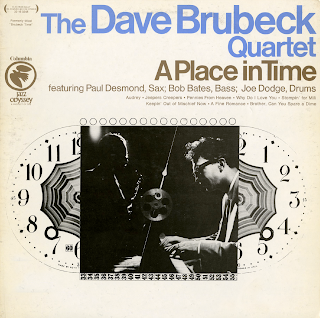 From the back cover: In late 1954, when I was asked to line up material for a studio session in New York, I talked it over with Paul, Joe and Bob, and we were all reluctant to do a formal studio session. Of course, we had heard of the wonderful acoustics of Columbia's 30th Street studio, but, no matter how great it might be, it was still a studio. We all felt our group performed better before a live audience.

I was pretty skeptical when I walked into that enormous room, so it was a real surprise to me that most of the tunes we recorded during the studio session were good on the first take. If memory serves me right, "Brother, Can You Spare A Dime," "A Fine Romance," "Why Do I Love You," Keeping' Out Of Mischief Now" and "Pennies From Heaven" were all first takes. Studio or not, I have to admit things went well.

As you might imagine, though, we felt that we were on pretty shaky ground, and undoubtedly our playing reflected the shakiness. Gjon Mili (the famous photographer who was at the session to consider the Quartet for a film feature) was impatient with our nervousness, and after the first take, he declaimed in clear, firm tones, "My first impression was right. You're no good."

At this point, my blood began to boil. Once again I resented all studios and all people who thought jazz "is like a faucet; it goes off and on." of course, Mili had first heard us in fairly top form at Basin Street with a good, live audience. Naturally, he wanted that for his sound track, but now were we to deliver under these conditions?

But we jumped in, and now when I hear "Stompin' for Mili," it is evident that this is my musical expression of rage and frustration. The first quote I played in my solo, "Thank You For A Lovely Evening," pointed directly at Gjon.

We finished with a feeling that we had redeemed ourselves. I can still see Mili jumping from his chair, exclaiming "You're hot! By God, you're hot! Don't stop now!"

Anyway, we all ended friends again and amenable to the suggestion that we next play a minor blues in a quiet view. "I would like," said Gjon, closing his eyes, "to see Audrey Hepburn come walking through the woods..."

"One," I said, noticing the glazed expression about Paul's eyes, "two, three, four."

And we played it. Hence the title.

Pete Rugolo once told me that he would like to hear more of the arranged counterpoint we used to play. So when we decided to record in a formal session, I wrote arrangements for the first and last choruses of most of the tunes, but we retained the privilege of playing our own little games of improvising counterpoint before going into the written chorus. Many people have suggested that we play some of the arrangements that were more or less characteristic of my earlier trio and quartet. So, the arrangement of "Brother, Can You Spare A Dime" is a very simple canon, with the alto stating the theme and the bass and piano handling the successive entrances.

In "Keepin' Out Of Mischief Now," we tired to retain the true flavor of the original Fats Waller composition. Most of the newer schools of jazz have forgotten the wonderful old Waller tunes.

"Jeeper Creepers" is a natural for jazz groups, but the first time I ever heard it played as a jazz tune was in 1949, when trumpeter Dick Collins wrote an arrangement for himself, Paul and the trio I had then. However, Dick isn't responsible for our hokey ending – we just tagged that on for laughs.

Except for a series of modulations, we stuck very close to the original melody of "Why Do I Love You." And there's no arrangement on "Pennies From Heaven" – it's a one-shot version of an old standard that was thrown in for good measure and just happened to turn out well.

All in all, I think it's a good album. Paul was great on "Audrey," and I think there are some exciting moments in all the tunes. The main criterion is not our individual efforts so much as how we perform as a group, the overall feeding and form that sometimes – even in spite of studios – do take shape. – Dave Brubeck

Audrey
Jeepers Creepers
Pennies From Heaven
Why Do I Love You
Stompin' For Mili
Keepin' Out Of Mischief Now
A Fine Romance
Brother, Can You Spare A Dime
Posted by By Mark Betcher at 7:36 PM