Cruise Along - Dance Along - Geraldo 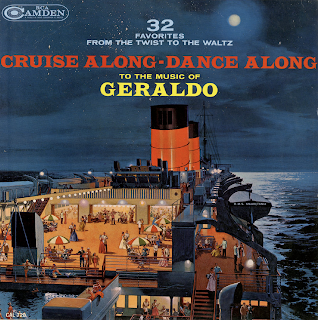 Quick Step Medley
Cruise Along - Dance Along
To The Music Of Geraldo and His Orchestra
32 Favorites From The Twist To The Waltz
A&R Coordinator: Ethel Gabriel
Recorded in England
Cover Courtesy of Conard Steamship Co., LTD.
RCA Camden CAL-720
1962

From the back cover: Outstanding among cruise-liner maestri is Geraldo, musical director of the Cunard fleet. A leading British bandleader, he reigned in the Thirties along with such other great British batoneers as Ray Noble, Ambrose and Jack Hylton. His orchestra was one of London's top society bands, that wonderful and long-lived genre that plays a suave music perfect for dinner-dancing, for discreet conversation, for the fun and games and party activities of civilized people on a night out. When the present Duke Of Windsor was still the Prince of Wales, Geraldo was more often than not responsible for the musical background of that gay period. His long reign as piper to British society is further evidenced by the fact that his band was selected to play for Queen Elizabeth and Prince Philip at festivities in 1955.

Quick Step Medley: Brazil / Taboo / Perhaps, Perhaps, Perhaps / Besame Mucho
Mambo Medley: Mambo No. 5 / Mambo No. 8 / El Cumbanchero / Mambo Jambo
Foxtrot Medley: Perfidia / You Are Always In My Heart / You Belong In My Heart / Cherry
The Twist Medley: Deep In The Heart Of Texas / Come To The Mardi Gras / You Are My Sunshine / I'm Thinking Tonight Of My Blue Eyes
Quick Step Medley: Baia / Can't Get Out Of This Mood / Tico-Tico / Granada
Cha Cha Cha Medley: Patricia, It's Patricia / Sweet And Gentle / Sway / Nicolasa
Old Fashioned Waltz Medley: The Story Of Love / Be Mine Tonight / Casey / Maria Elena / The Story Of Love
Foxtrot Medley: Frenesi / Without You / Come Closer To Me / Time Was
Posted by By Mark Betcher at 6:40 PM