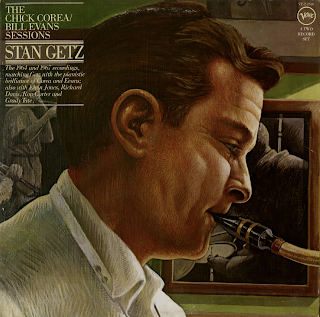 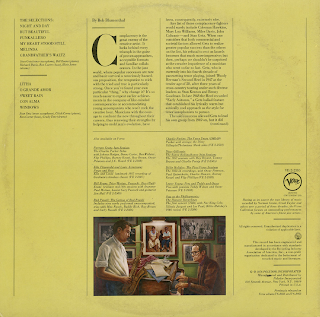 From the cover: Getz, who is currently into his fourth decade of pacesetting tenor playing, joined Woody Herman's Second Herd in 1947 at the tender age of 20, after three years of cross-country touring under such diverse leaders as Stan Kenton and Benny Goodman. In late 1948 the Herd recorded "Early Autumn," a Getz ballad feature that established his lyrically warm but sonically cool approach as the style for tenor saxophonists to pursue.

The solo's success allowed Getz to lead his own group from 1949 on, but it did not turn him into a one-dimensional musician. In 1950 Getz emphasized his commitment to more intense blowing on some marvelous live recordings made at George Wein's old Boston club Storyville. "It's fun swinging and getting hot for a change instead of trying to be cool," Getz told Leonard Feather at the time. "I don't want to become stagnant. I can be a real stomping tenor man.

For all the polls he won without interruption during the decade, the '50s were a time of crisis for Getz. A brief but unhappy stint as a studio musician, a failing marriage, drug busts, a suicide attempt, six months in a California Jail, an auto-crash that almost killed one of his sons, a near-fatal case of pneumonia, and the increasing hostilities of black musicians all took their toll; in July 1958, Getz and his Danish second wife fled the United States for the outskirts of Copenhagen. When Getz returned in January 1961, John Coltrane had established himself as the dominant trendsetter among tenor saxophonists. Getz could have accommodated as eager group of reactionary listeners who felt Coltrane's way was somehow "anti-jazz," but sedate rehashing of "Early Autumn" and "Moonlight In Vermont" were not what he had in mind. He proceeded to hire such young explorers as Steve Kuhn, Jimmy Garrison and Scott La Faro, and at the close of '61 undertook the soloist's role in Eddie Sauter's ground-breaking work "Focus."

Then, without warning, success struck for the second time. In early 1962 Getz and Charlie Byrd recored some new tunes the guitarist had brought back from Brazil. The resulting album, Jazz Samba (and its lead tune "Desafinado"), became a Top Ten hit and brought Getz his first Grammy Award. Bossa nova was the musical sound of the moment, thanks to the Getz/Byrd recordings, and the smart business move was to place Stan in additional Brazilian settings. Verve responded accordingly, matching Getz with Luis Bonfa, Laurindo Almeida and Gary McFarland's big band bossa nova," but the saxophonist refused to fall into a samba somnolence. In clubs, he condescendingly referred to his hit time as "Dis Here Finado"; in the recording studio, he hosted the 1963 summit meeting with Bill Evans, Elvin Jones, Richard Davis and Ron Carter, included on this collection's first record.

The pairing of Getz and Evans had been anticipated for years, as both players represent the epitome of lyricism, attention to nuance, and quiet strength. The real stroke of genius on the part of Getz, Evans and producer Creed Taylor was in the choice of a rhythm section. Elvin Jones, who was lighting brilliant percussive fires under Coltrane at the time, brought out the assertive side of both soloists. As Getz appreciatively told Leonard Feather a year after the session, "Elvin's a wonderful drummer... so wide and loose." These adjectives could also apply to Ron Carter and Richard Davis, two then up-and-coming bassists with distinctively iconoclastic approaches to the modern mainstream. Each had previously worked productively with Eric Dolphy, a sign of their inquisitive natures.

As many performances of the '60s Getz left the choice of material to others. Evans clearly called the tunes here: "Night And Day' and "My Heart Stood Still" appeared on early Evans trio sessions, and a recent live album found the pianist still playing "But Beautiful." Getz came to this session intending to blow, and if occasional reed squeaks and honked low notes suggest that he may have been forcing it a bit, we generally hear a master in inspired, heated flight, far from the polite niceties of the stark contrast to his more commercial work of that time that kept the Getz/Evan sessions unissued for a decade.