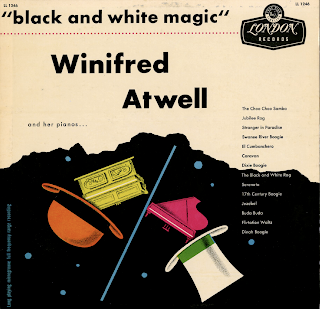 From the back cover: She (Atwell) was born in Tunapuna, Trinidad, and started to learn the piano at the age of four. At six she had already given Chopin recitals at local concerts. Her father was a chemist, and Winifred was sent to study pharmacy in order that she might eventually take over the family business. But the urge to become a pianist was too strong and eventually she got parental permission to study music full time. She gave classical recitals at the Service Clubs in Piarco, where one day somebody bet her she couldn't play boogie-woogie. Winifred proved that she could by turning up next day with a composition that was eventually recorded under the name of Five Finger Boogie.

In 1946 she came to England and studied the piano under Harold Craxton, at first playing only one or two minor concert engagements. Then came a chance to go into variety. The producer, Eric Fawcett, was working out the idea for a show that was to be called "Sepia", starring Adelaide Hall and Edric Connor. He took a chance with the unknown Winifred Atwell, and her performance of a piece called Voodoo Moon proved to be one of the best parts of the program. Her really big break came when as agent put her in a charity show in a big London theatre in place of an actress who, at the last moment, was unable to appear through illness. She was a great success and was immediately signed by Bernard Delfont on a long-term contract. The first theatre she played at was the Empire Theatre, Belfast, soon followed by a twice-nightly spell at the London Casino, and a period with Edmundo Ros at the Bagatelle Restaurant. In the last few years she has headed her own shows sharing the bill with Frankie Howerd and other top line entertainers. Her recent triumphal tour in Australia has confirmed the world-wide popularity of the girl from Trinidad.

In 1951 she made her first record with London; this was The Gypsy Samba And Manzanilla. The second record, on one side of which was Jezebel, became a bestseller, but it was Black And White Rag which undoubtedly made her out of the top entertainers in this country. To suit the old style of the George Botsford ragtime tune she had chosen, she found an old tiny piano, and the intriguing tones of this instrument started a craze for this kind of recording. She always called this her "other" piano. More recordings of this type followed, Jubilee Rag, Britannia Rag, Dixie Boogie and Coronation Ray, most of them her own compositions, interspersed with her South American rhythm numbers and novelty items like the barrel-organ take-offs of popular waltz tunes. It was perhaps the rags, more than anything else, that became the Atwell trademark.

One of her greatest triumphs was her fortnight at the London Palladium. By now she was no longer the stage-shy beginner, but the polished and confident performer with a warn and charming personality. At this Mecca of all variety artists, English and American, Winifred Atwell has a tremendous success, with the natural result that anything she recorded from then on automatically became popular favorite. She capped all this being invited to appear at the 1952 Royal Command Variety Show.