An Evening With Franklyn MacCormack 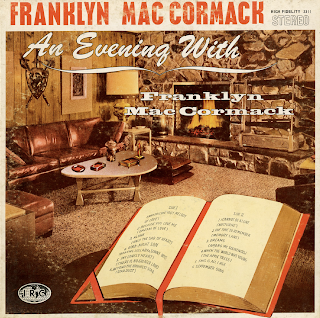 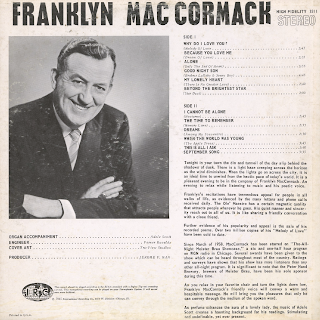 From the back cover: Since March of 1958, MacCormack has been starred on "The-All-Night Meister Brau Showcase." a six and one-half hour program on WGN radio in Chicago. Several awards have been given to the show which can be heard throughout most of the country. Ratings and surveys have shown that his show has more listeners than any other all-night program. It is significant to note that the Peter Hand Brewery, brewers of Meister Brau, have been his sole sponsor during this time.

Why Do I Love You?
Because You Love Me
Alone
Good Night Son
My Lonely Heart
Beyond The Brightest Star
I Cannot Be Alone
The Time To Remember
Dreams
When The World Was Young
This Is All I Ask
September Song
Posted by By Mark Betcher at 8:36 PM