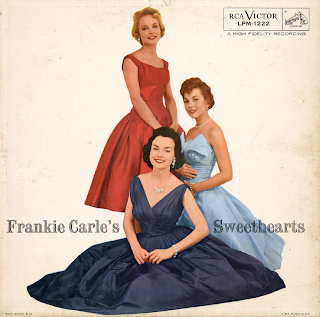 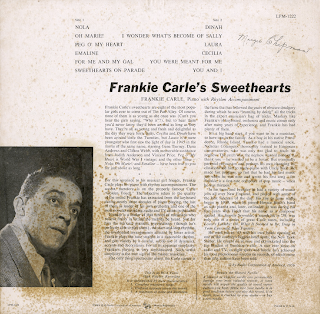 From the back cover: Frankie is a leader of that school of musicians who believe firmly in letting the melody be heard. Not for him the intricate pianistic pyrotechnics (though he's perfectly able to play them), the start-and-stop rhythms, the overloaded arrangements affected by lesser artists. Frankie plays the tune straight in a danceable rhythm, and gets variety by a careful, subtle use of dynamics. accents and decorations. For all its apparent simplicity, Frankie's playing is very sophisticated. such artful simplicity is the true sign of the master musician.

The only thing spectacular about the Carle career is the fame that has followed the years of obscure drudgery during which he was "learning by doing" all the tricks in the expert musician's bag of tricks. Mastery like Frankie's of keyboard, orchestra and music comes only after many years of experience, and Frankie has had plenty of them.

It's a big head start, of you want to be a musician, to have one in the family. As a boy in his native Providence, Rhode Islan, Frankie had a musical uncle, Nicholas Colangelo, throughly trained in European conservatories, who was only too glad to teach his nephews. The catch was the nephew wanted none of it, thank you – he wanted to be a boxer. But eventually parental persuasion and perhaps his own changing inclinations led him to study piano with Uncle Nick. He made fast progress, so fast that he had his first music job when he was nine and wrote his first song – for Frankie is a first-rate composer of pop music – when he was thirteen.

In his teens and twenties he had a variety of music jobs all over New England, and played with some of the best sidemen of the day. His rise to fame really began in 1939, when he joined Horace Heidt's band as solo pianist and, later, co-leader. It was during his five years with Heidt that his name as a composer spread. His Sunrise Serenade, a smash hit in '39, was only one of a series of great Carle tunes, including Lover's Lullaby; Oh, What It Seemed To Be; Deep In Your Eyes and Blue Fantasy.

He went out in '43 with his own band, opening at one of the country's biggest hotel spots, the New York Statler. He caught on at once and skyrocketed into the top bracket of banddom's elite. A star ever since on radio and TV, in night spots and hotels, he's achieved his most phenomenal success on records, of which more than fifty million have been sold.

Nola
Oh Marie!
Peg O' My Heart
Emaline
For Me And My Gal
Sweethearts On Parade
Dinad
I Wonder What's Become Of Sally
Laura
Cecilia
You Were Meant For Me
You And I
Posted by By Mark Betcher at 7:33 PM