Dynamica - Ray Martin And His Orchestra 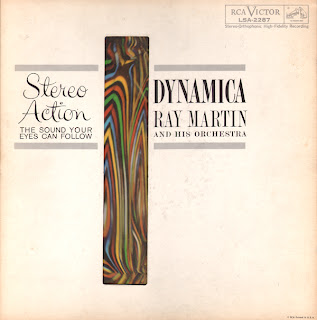 This album is available on CD. Although, one (Amazon) review states that the CD was produced from a MONO source. I can't imagine why RCA would have released a mono version of Stereo Action... but they did.

So, I will not be posting a sample. And too bad! This is a fabulous space age recording in the Stereo Action series of records. The jackets are heavy white cardboard with some type of die-cut that allowed abstract art printed on the cardboard sleeve to show through.

Some stereo "demonstration" records needlessly bounce audio from one channel to another. The Stereo Action on this record also bounces and rolls from right to left channel and back again. However, the over-the-top technique works well here to support the Martin's super space age music. The music is like easy listening/light pop meets Sputnik.
Posted by By Mark Betcher at 11:34 AM