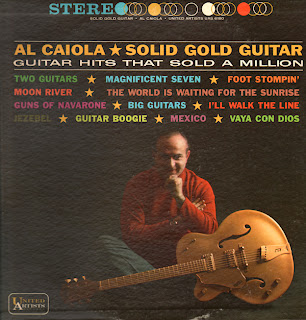 There is an interesting article on Caiola in the May 21, 1966 Billboard: Al Caiola, who records for the United Artists label is planning to come out of the the confines of recording studios for a crack at the in-person circuit. At the urging of Ashley-Famous, Caiola has been asked to consider a solid booking contract at one of the top clubs in Las Vegas, but Caiola has held back on his okay until he can look over the club.


Caiola believes that if and when he takes an in-person assignment, the club should offer virtually the same advantages he gets in a recording studio. He's especially interested in the acoustics of the room so that he can get a duplication of the sound that's made him a hot seller for United Artists Records.

The article goes on to say that Caiola produces a minimum of 60 sides a year, both albums and singles, to UA. On many dates he serves as arranger, conductor, composer and soloist.

On this album he served as arranger along with Nick Perito and Don Coasta.

The album is fun early 60s guitar play that sounds like tracks from movie or TV projects done up in a fat sound. This should be no surprise because Caiola, according to his Wiki page was doing a lot of movie, TV and commercial work for UA around this time.
Posted by By Mark Betcher at 6:45 PM