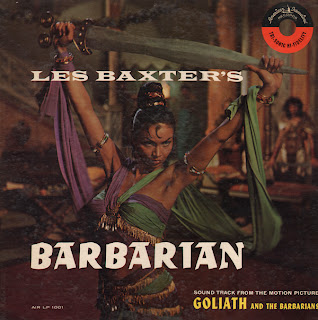 Soundtrack from Goliath And The Barbarians starring Steve Reeves. Baxter's name was well positioned on marketing materials to help promote this 1959 Italian strong-man movie in the U.S.

The January 4, 1960 Billboard liked the record and commented on the "eye catching" cover.

Apparently this record was reissued in 1978 featuring a cover taken from the movie poster (which is reproduced in black and white on the back of this album). A CD with both Baxter's Master Of The World and Goliath and the Barbarians scores are available on CD, all though today, the asking price is over $100 on Amazon. I found my vinyl copy at a real record store for $7. Who would pay that much for a CD?

I do love the cover, the score is professional and I'm sure possibly more than the movie deserves, but frankly, there are better Baxter albums to be collected. This movie seems right for the Baxter "exotica" treatment but the music seems "safe" except for Fire Dance, a track on the B side, which is smoking cool.
Posted by By Mark Betcher at 3:39 PM