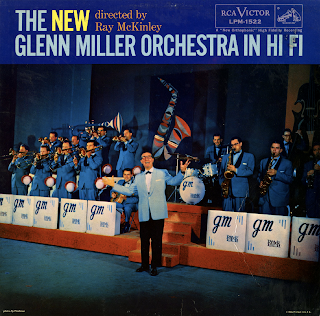 From the back cover: Ray McKinley at the head of the current Glenn Miller band is one of the most natural courses of events dancebandom could and should take. for when the Miller AAF band suddenly lost it's leader, Ray McKinley took over – not in rank, perhaps, but in spirit – not a soldier with a commission, but one with a mission – a mission to carry on the music, the spirit and the tradition of a very dear friend.

Back in the early Thirties, Glenn and Mac had become close friends as members of Smith Ballew's band. Together they joined and sparked the Dorsey Brothers' orchestra, working together, riding together on one-nighters, growing up together. Friends and mutual admirers they remained, apart as leaders of their own successful bands, reunited as Major Miller and T/Sgt. McKinley in one of the greatest musical outfits of all time.

When Glenn was lost, his bandsmen found a new leader in Ray. It was McKinley who led the great dance band; who fought for its rights with Army brass; who won the respect and affection of its soldier-musicians. And when, more than ten years later, the Miller band was reorganized, Helen Miller, Glenn's widow, asked Ray to assume the leadership of the new group.

The band's career has been most successful, both here and abroad. It has brought the music of Miller to many nations, including several behind the Iron Curtain. Its trip to Europe, where millions had heard the original Mill AFF band, was a resounding success, and upon its completion, the band settled into RCA Victor's Webster Hall studio for a series of recording sessions, the results of which are contained herein.

The band is mostly Miller-is. There is the warm reed sound with the familiar clarinet lead and the ooh-was of the brass in arrangements written by Joe Cribari and Deane Kincaide. But there is also a lot that is distinctly McKinley: his crisp, incisive, swinging drums; his witty, rhythmic vocals; his unending enthusiasm.

Ray's pulsating drums move as easy-going Don't Be That Way just as they did when Miller AFF band played it "in a medley that always thrilled me!" (End McKinley quote.) The trumpet solo is by Ed Zandy, a former Tex Beneke bandsman, who plays all trumpet solos on this record.

Don't Be That Way
I'm Thrilled
Whistle Stop
Hallelujah, I Just Love Her So
Mine
Anything Goes
I Almost Lost My Mind
Slumber Song
My Prayer
Accentuate The Positive
On The Street Where You Live
Lullaby Of Birdland
Posted by By Mark Betcher at 5:11 PM