In London, In Love - Norrie Paramor 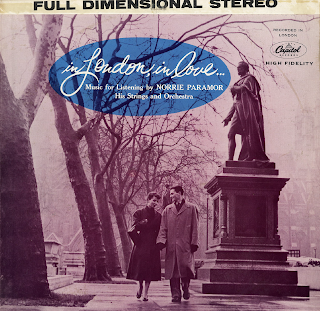 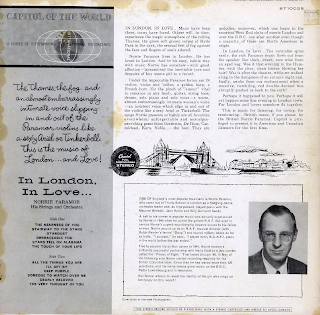 The Touch Of Your Lips
In London, In Love
Music For Listening by Norrie Paramor
His Strings and Orchestra
Recorded in London
Cover Photo by Interstate Photographers
Capitol Records ST 10025
1956

From the back cover: One of England's most popular musicians is Norrie Paramor, who came out of Trinity School in London as a fledgling dance orchestra leader and, as time passed, played piano with the Maurice Winnick, Jack Harris and Billy Gerhardt bands.

A halt to his career in popular music was abruptly experienced by Norrie in 1940 when he joined the gallant R.A.F. But even in service Norrie's superb musicianship became known to his fellow airmen. Norrie wound up as an R.A.F. musical director (with Ralph Reader's famed "Gang") and toured military bases as far as India. "I suspect," he says, "I played every N.A.A.F.I. piano in the world before the war ended."

Free to resumé's his civilian career in 1944, Norrie formed a brilliantly successful partnership with Harry Gold in a jazz combo called the "Pieces Of Eight," That lasted through '49 In May of the following year Norrie started recording regularly for the British Columbia label. Since then he has waxed more than 125 selections, and his name means good music on the B.B.C., Radio Luxembourg and in television.

But Norrie refuses to reveal the identity of the girl who sings so fetchingly on this record! (Patricia Clarke)

The Nearness Of You
Stairway To The Stars
Stardust
Embraceable You
Stars Fell On Alabama
The Touch Of Your Lips
All The Things You Are
I'll Get By
Deep Purple
Someone To Watch Over Me
Dearly Beloved
The Very Thought Of You
Posted by By Mark Betcher at 6:36 PM