The Greatest Dixieland Ever - Jonah Jones 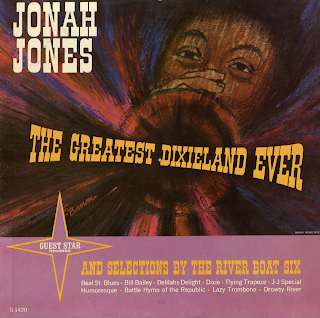 From the back cover: Jonah Jones was born in Louisville, Kentucky on December 31, 1909. He has been playing trumpet ever since he joined a kid's band in his home town at the age of twelve. He stayed on for the next six years and sat in with Bill Beason, Russell Bowles, Dicky Wells and Robert Carroll. From 1929 on Jonah has been featured with various organizations such as Horace Henderson, Jimmy Lunceford, Lil Armstrong, McKinney's Cotton Pickers, Stuff Smith, Teddy Wilson, Lionel Hampton, Benny Carter, Billie Holiday, Adrian Rollini, Fletcher Henderson and Cab Calloway. In 1944 to 1946 he had his own combo and in 1952 he played with Joe Bushkin art the Embers nightclub in New York City. During 1952 and 1953 he toured with the Earl Hines Combo and the Porgy & Bess pit band in 1953. In 1954 he spent several months in Europe as a solo attraction. In the late 1950's his albums suddenly began to catch the public's fancy in a big way, and in conjunction with very frequent television exposure his career enjoyed a tremendous renaissance. In Jonah Jones you find a musician whose balance of warmth and volume in his tone is the result of great skill on his instrument, which allows him to articulate every note as he feels it.