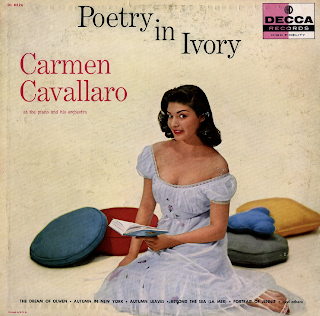 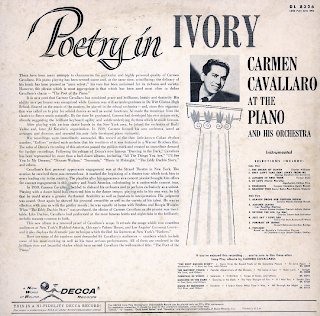 From the back cover: It is as a poet that Carmen Cavallaro has combined grace and brilliance, beauty and dexterity. His ability as a performer was recognized while Carmen was still an undergraduate in De Witt Clinton High School. Reared on the music of the masters, he played in the school orchestra – and, since this organization was called on to play for school dances as well as social functions, he made the transition from the classics to dance music naturally. By the time he graduated, Carmen had developed his own unique style, already suggesting the brilliant keyboard agility and subtle underlying rhythms which he made famous.

After playing with various dance bands in the New York area, he joined the orchestra of Rudy Vallee and, later Al Kavelin's organization. In 1939, Carmen formed his own orchestra, acted as arranger and director, and revealed his now full developed piano virtuosity.

His recording were immediately successful. His record of the then little-known Cuban rhythm number, "Enlloro" evoked such acclaim the this rendition of it was featured in a Warner Brothers film. The sales of Decca's recording of this selection passed the million mark and created an immediate demand for further recordings. Following the release of Decca's now famous "Dancing In The Dark," Cavallaro has been represented by more than a half-dozen albums, including "All The Things You Are," "I'll See You In My Dream," "Strauss Waltzes," "Serenade," "Music At Midnight," "The Eddy Duchin Story," and others.

Cavallaro's first personal appearance engagement was at the Strand Theatre in New York. The ovation he received there was tremendous; it marked the beginning of a theatre tour which took him to every leading city in the country. The plaudits after his appearance as a concert pianist brought him offers for concert engagements in this country and South America, culminating in a nation-wide concert tour.

In 1950, Carmen Cavallaro decided to disband his orchestra and to perform exclusively as a soloist. Playing with a dance band had restricted him to the dance tempo; playing solo in his own way, he felt that he could attain a greater rhythmical flexibility as well as a freedom in interpretation. His judgment was sound. Once again he showed his personal versatility as well as the variety of his talent. He was as effective with jazz as with the gentler moods; he was equally at home with Brahms and Boogie Boogie. When "The Eddy Duchin Story" was produced, the choice of Carmen Cavallaro as the pianist was inevitable. Like Duchin, Cavallaro had performed at the most famous hotels and nightclubs in the brilliantly melodic manner common to both.

This new album is a renewed proof of Cavallaro's scope. It reveals the range which won countless audiences at New York's Waldorf-Astoria, Chicago's Palmer House and Los Angeles' Cocoanut Grove – and it also displays the dramatic jazz technique which thrilled his listeners at New York's "Embers,"

From Billboard - October 27, 1956: Cavallaro's playing on the "Eddy Duchin Story" hit sound track package has brought him maximum showcasing, and riding on that crest of popularity, this new LP, too, should come in for good retail activity. Re-issue includes some of his most requested readings, including, "Dream Of Olwen," "Just Say I Love Her," "Beyond The Sea," "Autumn Leaves," etc. Jocks will find much playable stuff here.

The Dream Of Olwen
They Can't Take That Away From Me
Autumn In New York
In Love
Obsession
Shadow Time
Heaven Drops Her Curtain Down
Autumn Leaves
Beyond The Sea
Just Say I Love Her
Portrait Of Jennie
Twilight
Posted by By Mark Betcher at 5:39 PM