My Fair Lady & The King And I - Al Goodman 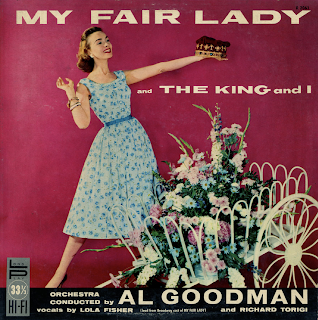 From the back cover: Al Goodman famous conductor and musician has devoted all his life to music. His love for music and his inherent musical ability were manifest at an early age when he sang soprano in his father's choir, became a musician in the pit of a local "movie house", and was awarded a scholarship to the Peabody Conservatory in Baltimore.

In 1915 Al Goodman was selected by Earl Carroll to accompany him to California as arranger and conductor. That was Goodman's official entry into show business... the start of an illustrious musical career which brought him into personal contact with the all-time "greats" of show business... as the conductor of many shows and musical productions whose successes were due in great measure to his outstanding ability.

Al Goodman produced musical comedies with Earl Carroll... never-to-be director and composer of all Shubert musical productions. He later became associated with various Radio and TV Shows as musical consultant and director such as the Hit Parade and the Colgate Hour. In his wide and varied career he was associated arranger, conductor, recording artist or musical supervisor for about 200 famous musical shows and programs. He has worked with the biggest names in the history of Broadway: Earl Carroll, Al Jolson, George White, Sigmund Romberg, Jack Benny, Fannie Brice, George Jessel, Flo Ziefeld, James Melton, Max Gordon, Bob Hope and many, many others.

From Billboard - March 3, 1958: For the price this is a real bargain. The top hits from both of the Broadway classic are presented with charm and appeal by the artists with excellent ork settings. Miss Fisher, former understudy to Julie Andrews in "My Fair Lady," gives polished performances.

With A Little Bit Of Luck
Wouldn't It Be Lovely
On The Street Where You Live
The Rain In Spain
I Could Have Danced All Night
Get Me To Church On Time
Shall We Dance
I Have Dreamed
Getting To Know You
We Kiss In The Shadow
Something Wonderful
Posted by By Mark Betcher at 4:31 PM