Three Loves Have I - Tito Rodriquez 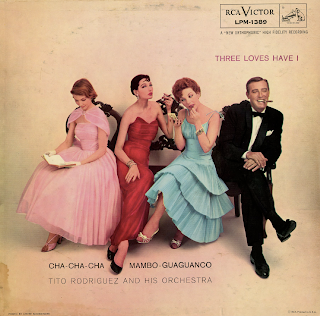 From the back cover: It all began, like so many worthwhile things begin, with a dream. The dream was that of someday leading one of the finest of all Latin-American dance orchestras and it belonged to a gifted young Puerto Rican lad and native of San Juan – Tito Rodriguez.

Today the dream has become a reality. But, like all dreams that eventually come true, it took hard work and determination plus talent. Tito also had something else in his favor – an inherent love, understanding and appreciation for the music of Latin America.

Tito's early, most formative years were centered around his aptitude for music. He found it comparatively simple to master the technique of any musical instrument he wanted to play; he learned to play most of them. And he learned something else – he had a voice. It was the kind of voice people like to listen to, it created excitement, and it brought him fame.

As vocalist with the Xavier Cugat and Enric Madriguera orchestras, it wasn't long before Tito Rodriquez was being heralded as the Number One Latin-Ameican Singing Personality. This would have been success enough for most people, but for the irrepressible Tito it was only the beginning. He still had his dream, and now he was in a better position than ever before to make it come true.

So it was, with a thoroughly tested musical apprenticeship, that Tito Rodriguez launched his own ten-piece band nine years ago. For aggregations have ever had a more meteoric rise to fame. The band has been acclaimed throughout the world, and the only thing that worries the lad from Puerto Rico these days is where to put the hundreds of citations he has been awarded.

Of the many honors to come his way, Tito is particularly happy about the 1952 Music Of New York City and the coveted honor from the famous Spanish newspaper, La Presnsa. For two consecutive years, La Prensa has voted Tito's orchestra the outstanding orchestra of Latin-American rhythms. – bob Prestegaard