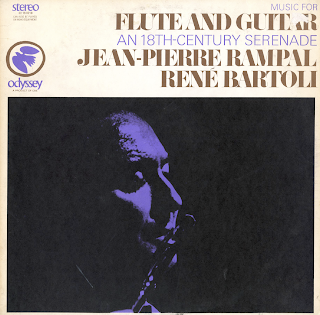 From the back cover: Jean-Baptiste Locillet (1680-1730 was born in Ghent and spent five years, from 1705 to 1710, in London, where he played the flute and oboe in the orchestra of the Queen's Theatre. His style is less typical of French music than of Italian, and it contains elements of what has been called "Handelian solidity."

Robert de Visee (1650-1725) was a French guitarist, singer and composer who served many years as chamber musician to King Louis XIV, at whose court he succeeded in making the guitar more popular than the lute. Like Quantz, he was an author, publishing two instruction books on the art of the guitar.

Mauro Giuliani (1781-1821) has been called "the most renowned of Italian guitarists and one of the most brilliant virtuosos the world has known. He spent the years 1807-1821 in Vienna, during which time his musicianship was much admired by Ludwig van Beethoven; and his style reflects a strong Viennese influence.

From Billboard - April 20, 1968: Charm and the highest skill mark the performance of both distinguished artists in this usual paring. Represented here are 18th-century composers Mauro Giuliana, Robert De Visee and Jean-Baptiste Loeillet.