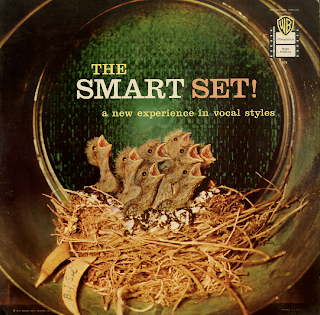 How About You
The Smart Set
A New Experience In Vocal Styles
Warner Bros. Records, Inc.
The First Name In Sound
BS 1203
1958

From the back cover: There are two Smart Sets involved here – the album itself and the singing group. And while the album is, indeed, a smart set of songs, it's the group which demands primary consideration.

Groups are made, not born. And this group was made by Jimmy Joyce, who auditioned Hollywood's finest voices before settling on the particular combination which is heard, here and now, singing its musical introduction to the record world.

Joyce directs the group, and this means considerably more than standing up front and beating time. Long before the group became a fact Joyce was hearing songs in his head. Not hallucinations exactly, rather musical plans. And now those plans are recorded reality.

There are many singers in the world, though few who inject the necessary vibrance in their performance that spell the difference between the acceptable and the superior. The Smart Set give their material that strong and satisfying rhythmic feel, that almost indefinable zest that is the difference.

Harmonically the group has a truly modern sound. Not the sound-for-sound's sake kind of dissonance used by some ultra-progressive to progress themselves out of contact with an audience, but a happy sound that can be understood and enjoyed by people of any age.

Beyond this, there is that thing called interpretation, that special way of combining voice and song which, in the case of The Smart Set, winds up being a distinctive and delightful experience.

For this initial album The Smart Set has chosen a dozen songs in the great tradition of popular music. They are standards, evergreens, the ones that live forever. And here, in their brand spanking new arrangements, with musical backing by Ralph Carmichael's orchestra plus The Guitars, Inc., they take on a new luster, a new life.

Bye Bye Blackbird
Cheek To Cheek
You'd Be So Nice To Come Home To
I Only Have Eyes For You
Moon Song
How About You
Ol' Man River
Just Squeeze Me
Why Do I Love You
Mood Indigo
Just You, Just Me
Bye, Bye Blues
Posted by By Mark Betcher at 6:31 PM