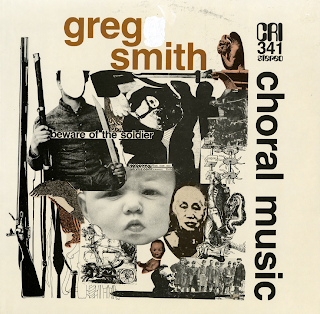 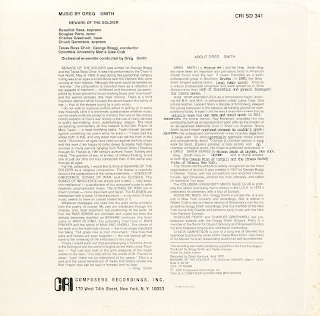 This appears to be a proof copy of Beware The Soldier. The second "g" in Gregg Smith's first name, on the front and back jacket, have been covered over with white-out. The back jacket notes feature typewritten corrections pasted over the printed copy. To make this jacket more of a mystery, I found this copy in the original shrink wrap.

From the back cover: Beware The Soldier was written by George Bragg and the Texas Boy's Choir. It was first performed by the Choir in Fort Worth, May of 1969. It was during this period that campus rioting was at an apex and emotions over the Vietnam War were running at their highest. Although the work could be labeled as "anti-war," the composition is intended more as a reflection of two aspects of mankind – childhood and innocences (as exemplified by those wonderful music-making boys) and "manhood" and the warrior complex (the male chorus). There is a third important element which focuses the above toward the futility of war – that of the elegies (sung by a solo voice).

I do not wish to espouse politics either in writing or in some war musically (and it is extremely questionable whether music can be really political) except to mention that one of the (many) horrific aspects of man's war-history is the use of many devices to justify war-making, even, astonishingly, religion. The most devastating commentary on this malaise in the War Prayer of Mark Twain. – a most horrifying satire. Twain himself decided against publishing his poem while he lived – "I have told the whole truth in that, and only dead men can tell the truth in this world." But men in all ages have cried out against the folly or war and this work (I am happy to note) draws its poetry from many sources in many periods ranging from Roman times (Tibullus) through St. Francis to 19th century authors Twain. Tolstoy and Hardy. The question of war, of armies, of military thinking, is not one of just our time but has concerned men in the same way through all ages. – Greg Smith