What Smoking Has Done For Me - Tom Medlock 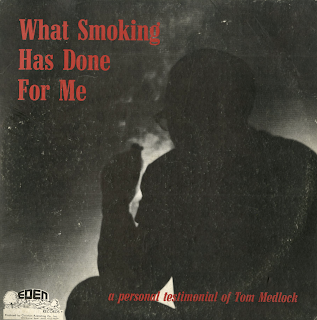 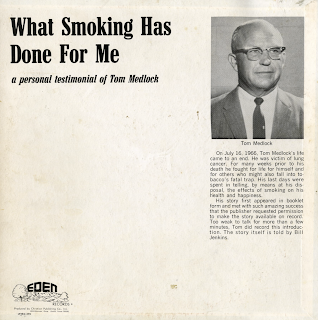 What Smoking Has Done For Me
A Personal Testimonial Of Tom Medlock
Eden Records
Produced by Christian Publishing Co. Inc. - Dallas, Texas
LP103-395

From the back cover: On July 16, 1966, Tom Medlock's life came to an end. He was the victim of lung cancer. For many weeks prior to his death he fought for life for himself and for others who might also fall into tobacco's fatal trap. His last days were spent in telling, by means at his disposal, the effects of smoking on his health and happiness.

His story first appeared in booklet form and met with such amazing success that the publisher requested permission to make the story available on record. Too weak to talk for more than a few minutes, Tom did record this introduction. The story itself is told by Bill Jenkins.
Posted by By Mark Betcher at 6:23 AM