The Thief Who Came To Dinner - Henry Mancini 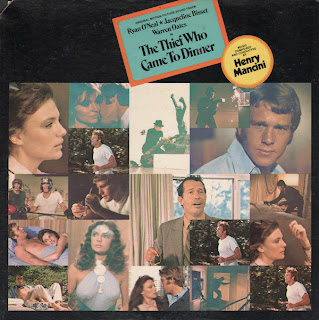 I know... where's the link? There is none because I'm assuming someone somewhere cares about the copyright to this album. Apparently there was a CD released last year, but is now unavailable and at least one track is available for digital purchase download.

Sometimes I just post album covers because the LP is worth looking for. This is another example. Mancini was still grooving in 1973 when he scored this soundtrack. This album features that good and cheesy 70s movie/TV soundtrack vibe I know and love. But Mancini takes that period audio groove and arranges with a depth and variation that other composers can't touch. Great stuff.
Posted by By Mark Betcher at 4:48 AM