Music Of The Near East - Ali Beirut 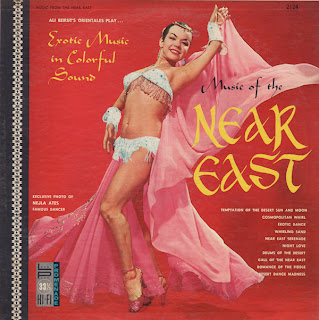 This is a good budget album that may have been released on several other bargain labels such as Pirouette.

But that doesn't take away from the fun. The fabulous cheesecake cover features Nejla Ates. She also appears on a El-Bakker title: Port Said. The music is very good for this sort of album in that the engineering is excellent. The instrument separation is clean and percussion really pops. The LP almost sounds as if it is playing in stereo. The arrangements are inventive and the pacing of album helps hold interest.

Good stuff!
Posted by By Mark Betcher at 7:26 AM