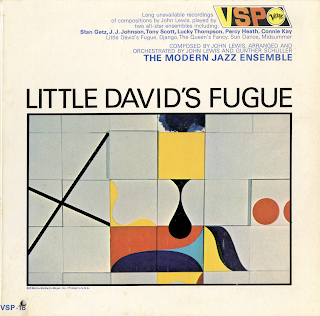 Available from online vendors so I will not be posting a sample. Presented here to share the cover art and jacket information.

Also from the back cover: Little David's Fugue is a fugue. The expositions are written while the episodes are improvised on a predetermined chord structure; the accompanying instruments participate in the development of intervallic and rhythmic elements of the subject. Django is an arrangement and orchestration by Mr. Schuller. The piece is a memoriam for and is dedicated to the late great French Guitarist Django Reinhardt. The Queen's Fancy was written during the weeks of the coronation of H. M. Queen Elizabeth II of England. This piece was also arranged and orchestrated by Gunther Schuller, Midsommer is an adagio in a general first rondo form, the chord structure of the second theme being used for improvisations. The title and inspiration is from the Swedish summer holiday and festival. Sun Dance was inspired by dancers, namely the Hopis of New Mexico and the great Watusi dancers in the film entitled "King Solomon's Mines." – John Lewis