Anyone For Mozart? - The Swingle Singers 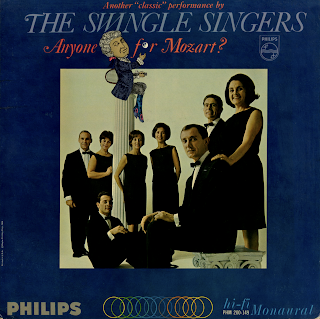 Anyone For Mozart?
Another "Classic" Performance By The Swingle Singers
All selections were written by W. A. Mozart
Arranged by Ward Swingle
Drums: Daniel Humair
Bass: Guy Pederson
Philips Hi-Fi Monaural PHM 200149

From the back cover: The move from Bach and the baroque composers to Mozart required a certain amount of experiment and a great deal of concerted effort on the part of the singers and musicians. Already in the Going Baroque album, we had done works of Bach's sons, who themselves form a bridge between the Baroque and Classical styles. Their works had a great influence on Mozart, who strove towards simplicity in harmony and melody, as opposed to Bach's complicated counterpoint. Our problem was to lighten everything up. Our drummer, Daniel Humair, found some wonderful small, "Mozartian" cymbals in Switzerland, and our bass player, Guy Pedersen, developed a remarkably light pizzicato. All the singers worked to find ways to lighten the sound, and to keep the rhythm constantly above the beat, as though we were prohibited to touch the ground. The rehearsals and recording sessions were carried out, as always, in an atmosphere of experiment, communal discussion, and a nicely contagious excitement. – Ward Swingle

As 1964 drew to a close, the Swingle Singers were making a triumphant tour of America. Ward Swingle the 37 year old Alabaman who heads the group, had to drop his other writing and arranging chores to answer the demands for in-person hearings of his group's unique music. The Swingles taped two appearances for ABC-TV's Hollywood Palace, then played the White House for a state dinner given Israel's Prime Minister, Levi Eshkol, by President and Mrs. Johnson. – Dom Cerulli

From Billboard - January 30, 1965: This unique group has made an important impression on the record industry with their imaginative and creative jazz interpretations of Bach. "Bach's Greatest Hits" has been on BB's LP chart for 65 weeks. They display the same fine co-ordination of musical thought on this album of Mozart material. Stereo reproduction is excellent.

Allegro from Sonata No 14